Measuring the Impact of Spotted Wing Drosophila in 2013 – Your Help Needed!

Find this article at:
go.ncsu.edu/readext?260293
— Written By Hannah Burrack 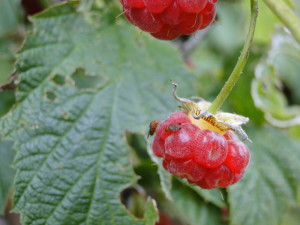 Since its detection in North Carolina in 2010, Drosophila suzukii, commonly referred to as spotted wing drosophila (SWD), has become a key pest of berry crops including blackberries, raspberries, strawberries, and blueberries.

The Southern IPM Center has supported a working group called eFly (which stands for eastern spotted wing drosophila fly) to coordinate scientists, extension personnel, growers, and marketers impacted by SWD. The first eFly meeting was held in September 2012, and this group met for the second time January 8-9, 2014. The goals of this meeting were to:

To ensure that we accurately capture the impacts of SWD, we conducted a preliminary online survey here from December 19, 2013 through January 19, 2014.

At the eFly meeting, we reviewed the results of this survey and collaborated to develop a more comprehensive survey. This new survey is available here and has also be distributed at grower meetings. Please share your thoughts!