In a previous article I covered the reasons why it would not be a good idea to spray automatically for cereal leaf beetle this year (Reasons You Will Lose Money in 2014 Tank Mixing an Insecticide with Your Nitrogen Over Wheat). To add fuel to that argument, cereal leaf beetle is behind “normal” schedule this year. 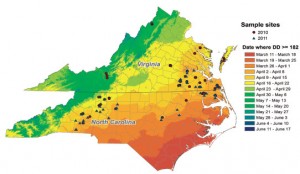 It is important to note that insecticides are effective only on the larvae, not the eggs. Larvae tend to peak 2-3 weeks after egg lay. Furthermore, rain and other weather events can kill eggs. It is therefore more critical than ever to hold off insecticide for cereal leaf beetle this year since it is too early and may not be needed.