Find this article at:
go.ncsu.edu/readext?303804
— Written By Dominic Reisig

Looks like this year may be another big one for stink bugs. Like last year, we have a good crop of winter weeds that will sustain stink bugs and cause problems in cotton and soybeans. Very little corn last year suffered from stink bug injury, but based on densities in wheat, we may have some problems this year. A month ago, I thought that stink bugs would not be a problem in corn since corn plantings seemed to happen a bit later this year. However, corn is growing well and wheat harvest is delayed. Stink bugs are already beginning to move from mature wheat into corn. However, our worst problems are when wheat is harvested next to adjacent corn. In the eastern part of our state, brown stink bug undergoes a generation in wheat and then moves into adjacent corn fields during the days following harvest.

The extent of injury to the corn depends on when the wheat is harvested, what life stage the majority of stink bugs are in during wheat harvest (are there a lot of nymphs or adults?), and what stage the corn is in. For example, wheat planted in November generally produces more stink bugs that can move into corn compared to wheat planted in December. In general, the worst situation is where corn pushing out an ear (just prior to tasseling) and adjacent wheat is harvested harboring a lot of adults. These adults can move into adjacent corn, especially on field edges, and deform the ear. Nymphs can walk from harvested wheat into adjacent corn fields, but will generally feed at the base of the plant and not up the stalk, where the ear is pushing out.

If you have corn the borders wheat, consider checking the wheat for stink bugs before harvest. The most susceptible stages of corn past the V6 stage is when the ear is forming. This is directly preceding and at tasseling. However, there are very little data about the period between V6 and tasseling. 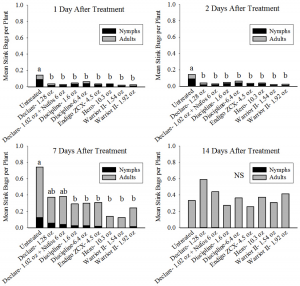 Because stink bugs are migrating in large densities from wheat into corn, the best time to treat corn is two to three days following wheat harvest. Stink bugs will be congregated along edges, but spread across the field within two weeks. As a result, if stink bugs are found in high densities in wheat, edges of corn fields bordering wheat should be treated soon after harvesting wheat. Research in NC has shown that aerial insecticide applications at tasseling are not only ineffective at lowering stink bug densities, but were likely too late to mitigate stink bug injury in corn. High clearance tractor sprayers are effective if you spray with most types of pyrethroids. You can expect some reduction of numbers for about a week. Adults can reinvade after the spray and there is little residual control.