What’s Up With All These Budworms?

Find this article at:
go.ncsu.edu/readext?304991
— Written By Hannah Burrack 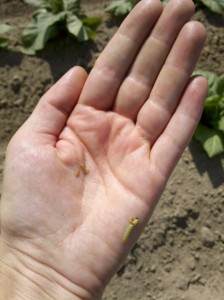 We exceed tobacco budworm thresholds at several of our scouting locations last week, which was also the case for a number of growers. This week, however, scouting at some of these same locations has revealed that budworm may still exceed threshold. This was the case at one of our research station experiments at the Lower Coastal Plain Research Station in Kinston, NC. Because we had untreated control plots in this experiment, we were able to tease out what likely happened at this and other locations. The larvae in our control plots were mostly large, and had likely been present last week when our treatments were applied. The larvae in the plots which were treated last week were small (first and second instars), which suggests that they were the result of eggs laid after we treated last week. This suggests that we are in the middle of a prolonged tobacco budworm flight, resulting in potential re-infestations, in the east-central part of the state.

**Update June 27: An additional note about determining whether tobacco budworm infestations require treatment. Plant size is an important consideration. If plants are within one week of topping, we do not recommend treatment as the parts of the plant that larvae are feeding on are likely to be removed during topping and it does not make economic sense to protect them.

So why aren’t we seeing activity on these new larvae from the treatments made last week? None of the insecticides applied as foliar treatments for tobacco budworms are systemic, meaning they do not move throughout plants. Some materials may be persistent in plants, meaning they may be present in toxic doses for insects on the treated leaves for longer periods of time than others. However, that last point is key! Any persistence or residual activity of an insecticide for budworms applies only to the treated leaves. The bud is the most dynamic, fasted growing part of the plant, and it’s likely with our warm weather and recent thunderstorms, the leaves which were treated last week are no longer the same as those that recently hatched budworm larvae are feeding on!

The fact that we can only expect residual activity of an insecticide on the leaves it was applied to underscores the important of only treating when budworms reach threshold. We cannot expect a foliar treatment applied weeks ago to be effective on bud tissue that has only grown out recently. Waiting to treat until tobacco budworms reach threshold maximizes the impact of those treatments and reduces the likelihood that a reapplication will be necessary. Although, as we are seeing this week, sometimes insect pressure trumps timing. We retreated several of our plots at the research station yesterday. A final point on retreatment, if you are making more than one application of an insecticide against the same target pest, always be sure to rotate to a new mode of action (MOA). The NC Agricultural Chemicals Manual and Tobacco Information both include information on MOAs for recommended insecticides.

Other pests present in fields 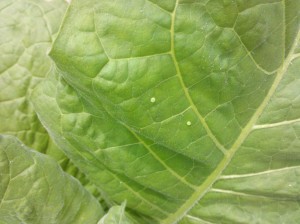 Tobacco and tomato hornworm eggs are round, blueish green and typically laid on the upper surface of leaves. We are not seeing large numbers of eggs in fields at this time. Photo: Hannah Burrack

With this age structure, I suspect that hornworm populations may stay below threshold for the time being, perhaps even through topping. However, if we start to spot more eggs or more small, recently hatched larvae, that prediction may change.

In addition to hornworms, growers are also observing some stink bug movement in tobacco. Stink bug feeding on tobacco leaf mid ribs can lead to wilted leaves, typically no more than one per plant. 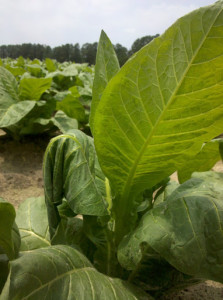 While it is important to be able to diagnose this injury, stink bugs rarely, if ever, impact yield and therefore, should not be the focus of additional insecticide applications. Further, the materials effective against stink bugs available for use in tobacco come with significant risk in the form of pesticide residue concerns and are unlikely to be effective against this highly mobile pest.