Find this article at:
go.ncsu.edu/readext?306670
— Written By Dominic Reisig

This week, I’ve received multiple reports of corn earworm in Bt corn hybrids that have controlled earworms in the past. Of the fields I’ve checked, all are properly producing the Bt protein toxic to earworm. It is not clear to me whether the insects have developed resistance to our products. What is clear is that we are experiencing a lot of heavy corn earworm pressure in our corn.

First, corn earworm that infests ears (not talking about whorl infestions) is not a yield-reducing pest in timely-planted corn. This has been confirmed in University studies across the Southeast and Mid-South. As you can see in the figure below, corn earworm injury at “normal” levels is not associated with a yield loss. 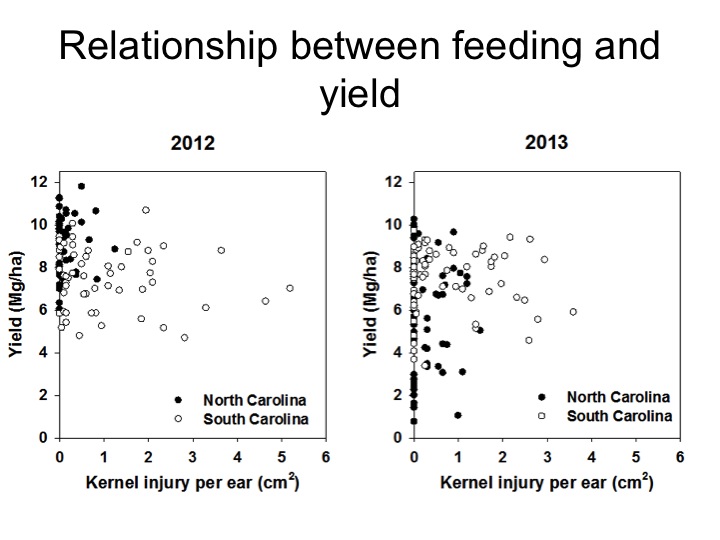 As corn earworm injury increases (measured by centimeters of kernels consumed), yield does not decrease at densities of corn earworm that are encountered in timely-planted corn. Yield in this graph is reported as metric units, rather than the US standard of bushels/A. 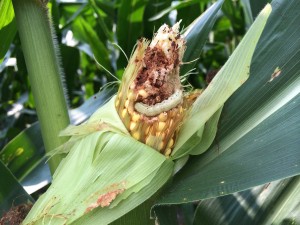 Corn earworm feeding in a hybrid rated as good to very good for corn earworm control. Sometimes under heavy pressure, we can find ears with extensive injury.

I will not make the claim that corn earworm can never cause a yield loss in corn from ear infestations, especially in late-planted corn. The picture to the left is from a hybrid expressing corn ears that is advertised as good to very good corn earworm control. I would classify this particular ear as poor to fair control. If every ear in the field looked like this, I would not hesitate to say that there would be a yield loss. Fortunately only a small percentage of the ears looked like this.

Here is a short list of select products and their efficacy for corn earworm. This information is compiled from University information across the southern US and from NC trials within the last 5 years: