Find this article at:
go.ncsu.edu/readext?309842
— Written By Hannah Burrack

During the last two weeks, there have been several reports of mealybugs in wine grape vineyards. Mealybugs are sucking insects, the females of which are often coated with white wax. As a by-product of their feeding, mealybugs produce a sweet, sticky liquid called honeydew, which can contaminate fruit itself or can become a medium for the growth of sooty mold, a name given to several fungi that produce a black mat on plant surfaces. 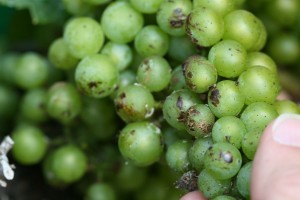 Grape mealybug on the surface of a fruit. Photo: Hannah Burrack

Growers that have vineyards affected by mealybugs should confirm what species of mealybugs they have. This is very important for several reasons. First, we know we have one species, the grape mealybug, in NC, but there are three other species that may also be present on grapes in other parts of the US. None of these other species have been from the NC. If we are dealing with a new species for the area, we need to know that. Second, one of these other species, the vine mealybug, is a very efficient vector of grape leafroll disease. The other mealybugs are not as efficient and are more of a problem as primary pests in clusters. Grape leafroll disease is present in NC, but we do not know many of the infections are due to infection at plant source and how many infections are due to local spread.

Because mealybugs have been relatively rare in NC, our assumption has been that much of the grape leafroll disease we see originated at the plant source. To get a correct species identification, growers should contact their local County Horticulture Extension Agent to assist with proper collection of samples. Samples should be sent into the NCSU Plant Disease and Insect Clinic, which is the fastest means of processing them. Physical samples, rather than photographs are strongly recommended, as mealybugs must be observed under a microscope to determine which species they are.

Samples should consist of infested plant tissue (leaves or fruit) with mealybug adults present. These should be stored in sealed containers and shipped to the NCSU Plant Disease and Insect Clinic. Ice packs can be included to keep insects from overheating.

Mealybug management recommendations are available in the Southern Region Small Fruit Consortium Bunch Grape IPM Guide. You will notice that these recommendations start at bud swell–there’s a good reason for this. Mealybugs are best managed early in the season or following harvest. This is because early in the year, mealybugs are moving from their overwintering location to new growth, and post harvest they are moving back to their overwintering sites. This time of year, in late summer, mealybugs are likely sheltered in closed clusters and insecticides directed at them now are unlikely to provide acceptable control because they cannot penetrate clusters. A strategy for dealing with unmanaged, late season mealybug populations is removing infested, sooty mold covered clusters so they are not harvested and to minimize spread. Note where in the vineyard these affected vines are and target them for treatment post harvest and in the spring. Systemic insecticides applied to soil early in the growing season often provide good mealybug control as do a range of other materials.