Tank Mixing an Insecticide for Cereal Leaf Beetle in Wheat

Find this article at:
go.ncsu.edu/readext?345622
— Written By Dominic Reisig and last updated by Carol Hicks

Recent research from North Carolina has suggested that there are times where tank mixing an insecticide with your nitrogen can be cheaper than using scouting and thresholds for cereal leaf beetle. The biggest reason for this is because there is a yield penalty for driving over wheat after jointing and because scouting costs money. However, you can lose money in certain situations. Unlike, 2014, where you were guaranteed to lose money tank mixing an insecticide with nitrogen, there may a few select situations in 2015 where this might pay. There may also be some situations where you lose big time tank mixing insecticide. 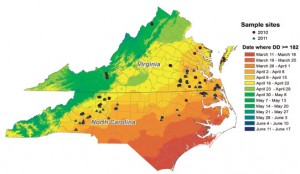 Time of peak egg lay based on 2010 and 2011 data. Note that cereal leaf beetle emergence was delayed in 2014 following the cold winter. This means that insecticide applied during March in 2014 was not effective to control the beetle. Figure from Philips et al. 2012.