Find this article at:
go.ncsu.edu/readext?356391
— Written By Dominic Reisig and last updated by Carol Hicks 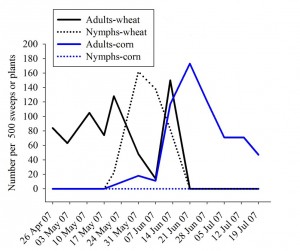 Stink bugs are important to watch in wheat since they can later move into corn and cause injury. I have a PhD student working on stink bugs who is trying to link wheat development to movement into corn. Associated with this project, he has sampled around 20 fields this week in Eastern NC. Adult numbers (~10 brown stink bugs and 3 rice stink bugs per 500 sweeps) appear to be on-par with a statewide survey done in 2011 and low compared to a survey done in northeastern NC during 2007 (see graph) . At this point, I am not overly concerned about stink bugs injuring corn above normal. However, we still have to see how many nymphs will develop in the next few weeks.

Can stink bugs damage wheat? It takes very high numbers to actually injure wheat. Thresholds range from 1 per square foot in GA to 1 per 5 to 10 heads in MS during the milk stage (most susceptible).  “Normal” to “high” stink bug numbers won’t hurt your wheat yield. We confirmed this by protecting wheat from stink bugs during the milk stage in a 2011 North Carolina experiment in Pitt County. Stink bugs were sprayed and eliminated using a commercial Hi-Boy in replicated strips (Hi-boy was driven through untreated strips). Unsprayed numbers averaged 25 per 500 sweeps (see numbers in first paragraph). Using the yield monitor on the grower combine, we determined that the sprayed wheat averaged 55.5 bu/A, while the unsprayed wheat avereaged 55.9 bu/A. North Carolina research done during 2008 (Drs. Eric Blinka and John Van Duyn) could not show a difference in any of the yield components when stink bug numbers were as high as 6 in 20 heads. Note that germination was reduced when stink bug numbers were this high, so seed producers should be more aggressive with sprays. 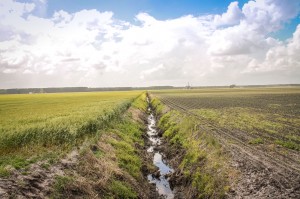 What about movement into corn? We need to keep an eye on how nymphs develop in wheat adjacent to corn. From what we know, corn is very susceptible to ear injury when it is forming prior to tasseling. More information will be posted in future articles.

Can I spray my wheat to prevent movement into corn? Spraying wheat stubble after harvest won’t prevent movement into corn and no research has been done spraying wheat prior to harvest to eliminate movement into corn. So I don’t know the answer.  Stink bugs can be killed with nearly any pyrethroid in wheat. They are much tougher to kill in corn, since they can hide in the folds of leaves. Most pyrethroids in wheat have a 30 day preharvest interval restriction and we are likely bumping up against this. One exception is Mustang Max, which carries a 14 day preharvest restriction.