Time to Think About Billbug Management in 2016 Corn

Find this article at:
go.ncsu.edu/readext?376016
— Written By Dominic Reisig and last updated by Carol Hicks

Now that corn is coming off it is time to think about billbug management in next year’s crop. The “old” recommendations still apply today. Here are some things to consider:

1) Location.  Billbugs undergo a single generation a year. They overwinter in field litter, ditches, and hedgerows. Non-rotated corn, corn fields planted adjacent to corn from last year, or field edges are the most problematic. Keep in mind this is a “swamp insect”. The worst problems are associated with fields in high-organic soils.

2) Planting date. Billbug adults move from overwintering into corn in April and May. In general, the earliest planted fields will be most heavily injured and infested by billbugs. After feeding, billbug females chew holes in the bottom of the plant and lay eggs. Larvae then develop in the stem. During wet years, these larvae will tunnel up the stalk and can cause corn to lodge.

3) Weed control.  Billbugs will feed on many other plants besides corn, including cattails and will feed and reproduce on nutsedge. Good weed control within the field and in areas surrounding the field are critical to reduce feeding and reproductive hosts for the insect.

4) Optimize pH, fertility, tillage and drainage.  Rapid germination and growth is critical. Things that slow seedling growth will exacerbate billbug injury. Starter is a must for corn in areas with historical billbug pressure.

5) Hybrid selection. Hybrids with good early season vigor and good cool germ are a must for effective billbug management.

6) Seed treatments.  John Van Duyn demonstrated the necessity for neonicotinoid seed treatments in billbug-intensive areas. Poncho 1250 is still the insecticidal seed treatment of choice for effective management. From 2013-2015, eight trials with significant results using Poncho 1250 as a standard have confirmed this treatment as among the best. Only one seed treatment, Lumivia, in combination with Cruiser 250, can provide equivalent control. Representative examples are included below. 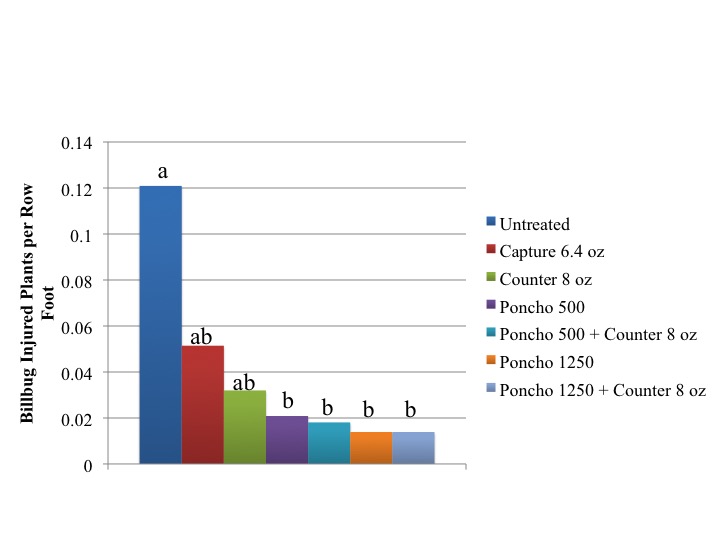 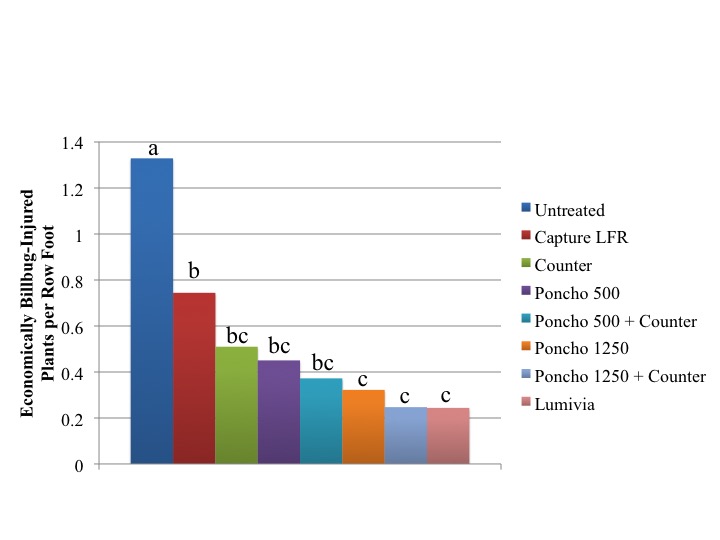 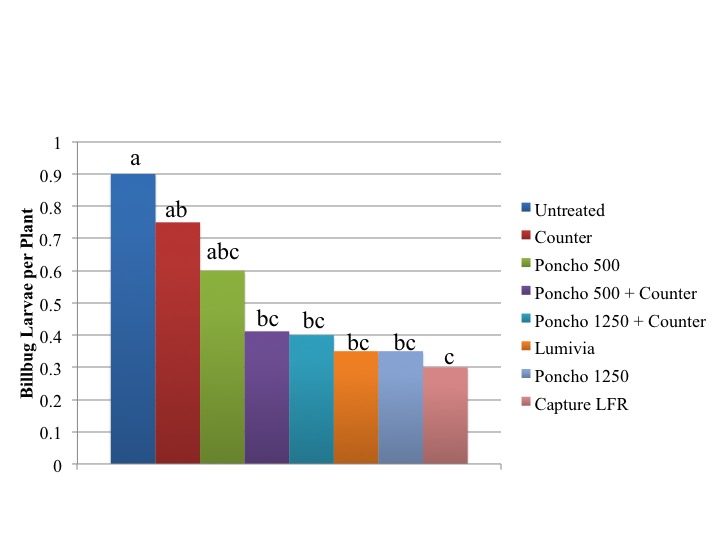 7) Insecticidal sprays. Over-the-top rescue treatments are generally ineffective since infestations are generally identified once the damage is done and since billbugs are most active at night, harboring underneath litter and soil during the day.