Find this article at:
go.ncsu.edu/readext?415460
— Written By Dominic Reisig 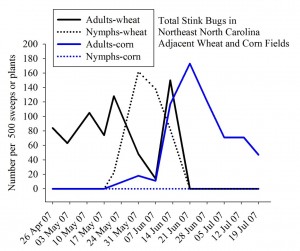 Folks have noted stink bugs moving into corn rapidly over the past week across the Coastal Plain. This is not a surprise, as stink bugs have built up a generation in weeds and wheat and are moving into other hosts, such as corn. Note from the graph to the left that this is only the beginning of the time where we see typical movement into corn. Expect this to continue for the next couple weeks.

Keep in mind that effective treatments are all about timing and good timing relies on scouting. Unfortunately a calendar spray will not work well for this insect. Our recommendation is to scout, apply an insecticide when the stink bugs reach threshold (temporarily set at one per ten plants from V8 to VT, to be conservative in 2016, then one per two plants VT to V3, and one per plant R3+), and to re-scout to see if any might have moved back into corn. Management recommendations can be found in this previous article. Recommendations for scouting are below.

– What surrounds your corn?  Stink bugs can move from woods, weeds, and wheat. Check the surrounding environment to see if any stink bugs are present that might move into your corn.

– Check the entire plant.  I have seen stink bugs resting in or feeding on almost every part of the corn plant. You need to be a ninja scouter, since stink bugs may notice you coming and hide out in the plant. Stink bugs hiding in the whorl (top right photo) aren’t causing any damage. Stink bugs feeding on the stalk while the ear is developing (far left photo) are what you want to avoid. 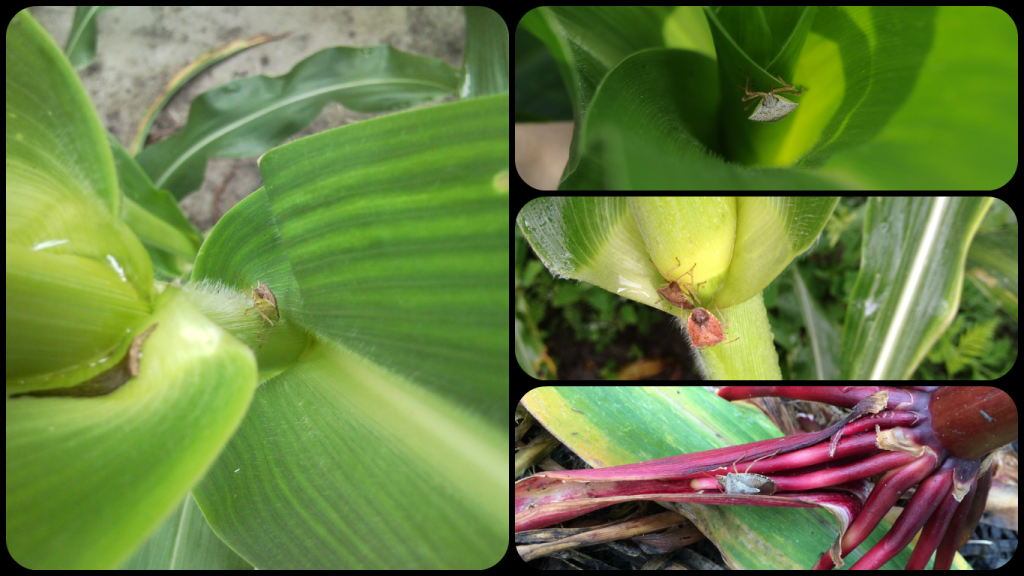