It’s Been Warm! Know When to Check for Cereal Leaf Beetle in Wheat

Find this article at:
go.ncsu.edu/readext?451353
— Written By Dominic Reisig 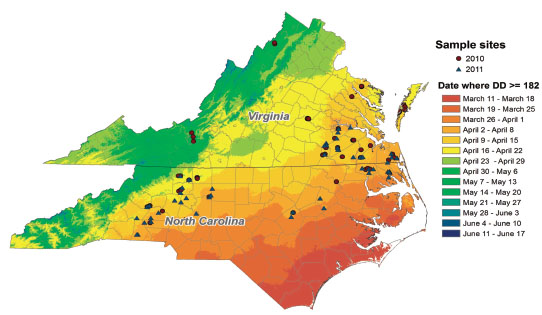 Yesterday was much more than the first day of March 2017 here at the research station at Plymouth, North Carolina. Using the cereal leaf beetle degree day model, we should have hit peak egg lay for this insect at this location. That means that larval numbers should peak here in Plymouth on March 18, 2017 once they hatch from the eggs. On average, we are about three weeks ahead for this insect (see the map). What does this mean for scouting and treating this insect? Here are some tips, given that we are in a year like 2017, when they might show a bit earlier than usual. 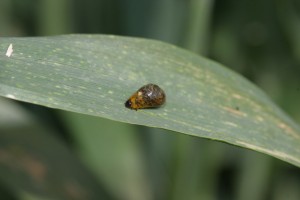 How many insects are there?  Our established threshold is one larva or egg per four tillers, with more larvae than eggs present to justify a spray. Note that scouting should be done away from the field edge, since they tend to clump in fields and near edges. Dirty pant legs and windshield scouting will not work for this insect. Your eye tends to be drawn to damage; when you pull random tillers, rather than scanning the field, there are fewer insects than you think. If you are in the dark orange or red zone on the map at the top of this article, it’s probably time to start looking. If you don’t see larvae in a few weeks, you probably won’t have any beetles. If you are in the yellow or green areas on the map, hold off scouting for a few weeks.

Did you spray an insecticide already?  If you sprayed an insecticide a month ago, consider it gone. Residual from pyrethroids for cereal leaf beetle is phenomenal. However, at its best, it will only last a month. 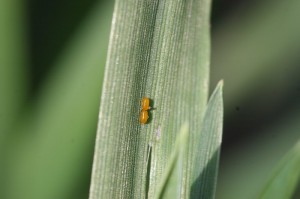 How are you going to apply the spray?  Keep in mind that yield loss solely due to drive-down after jointing is 3.3% (assuming a 90 foot boom with 18-inch tires).