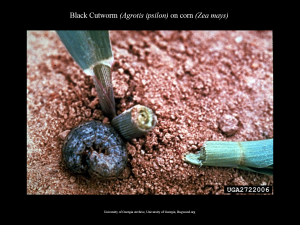 Black cutworm (Agrotis ipsilon) is the most commonly found cutworm in NC corn fields although several other species do occur in corn. Cutworms are pests of seedling corn and are most active during periods of low sunshine or at night. Smaller caterpillars eat leaf tissue and larger larvae mainly feed on stems and cut-off plants. They cut-off small stem seedlings (e.g. up to about six leaves) and bore a hole near ground level in larger stemmed plants. Once seedlings are cut the caterpillar most often attempts to pull it into the soil before fully consuming the plant. In this case plant parts may be seen protruding from the soil and if excavated, the cutworm larvae will often be found. Fed-upon plants may be superficially injured or seriously damaged or killed, depending upon where feeding occurs and the extent of feeding. In instances where plants are cut above the growing point, seedlings will recover fully if further damage is prevented. However, feeding that affects the growing point will cause the plant to deform, sucker, or die. Cutworm damage is largely confined to plants less than the eight-leaf stage in size although larger plants will sometimes be attacked. Active caterpillars normally dwell on the surface but in dry, loose soil and in situations with lots of plant residue the larvae prefer to remain under the soil or residue almost all the time. In this case the stumps of cut-off plants will not be visible without excavation. Yield reduction from cutworm injury is due to reduced plant stands. 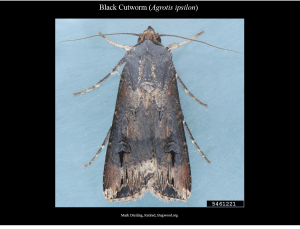 In general, there is no consistent or predictable pattern to cutworm occurrence and the probability of a damaging infestation in any individual field is low. However, cutworms appear to be more numerous in fields having plant residue and weed growth during the preceding fall, winter, or early spring. Some farm fields or farming areas of the state have a higher cutworm incidence than others. Cutworms are more common in no-tillage planted corn. In addition to cutworm numbers, the level of injury to seedlings is highly influenced by the rate of seedling growth. Since small seedlings are very easily cut-off and represent a smaller amount of food per plant for a caterpillar, populations of small and slow growing seedlings will sustain greater cutworm injury (versus stands of larger and more rapidly growing seedlings).

Cutworm can best be managed with an approach including several tactics. Practices mentioned under cultural practices can help insure that the crop starts-off with a full stand of rapidly growing seedlings. See scouting guidelines for seedling pests. Successfully managing weeds in the off-season and just before corn planting also may have a big influence on cutworm numbers at seedling time. This consideration includes an early burn-down of winter weeds in no-tillage or strip-tillage fields (burn-down at least 3 weeks in advance of planting). Seedling corn should be scouted for cutworm and other insects starting at the one leaf stage. Often cutworm will be thinning plant stands in concert with other seedling pests (e.g. billbugs, wireworms, brown stink bug, and others) and foliar insecticide treatment may be determined by above threshold plant stand loss. When several pests occur, a foliar insecticide that is effective on all insects in the complex should be selected.

Granular and spray insecticide formulations can be useful against cutworms. Certain at-planting granular insecticides will give some suppression of cutworm but will not adequately control a severe infestation (the use of preventative soil insecticides should not be justified by cutworm alone, but if a soil insecticide is to be used, cutworm activity may be an important factor in insecticide selection). Broadcast or banded spray formulation of pyrethroid insecticides (e.g. Pounce and Warrior) can be effective. Seed treatment insecticides will give little protection against cutworm injury. Most often cutworm infestations are controlled by using a broadcast spray applied to infested fields. Automatically adding an insecticide for cutworm control to the burn-down herbicide solution in no-tillage situations in not recommended unless there is a commanding reason to justify this practice (e.g. history of chronic infestation). Economic return or environmental consideration seldom justifies automatic treatments of insecticide. Some Bt proteins effectively control cutworms.