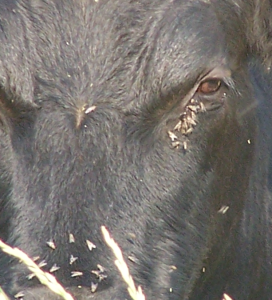 Figure 1. Face flies preferentially feed on the eyes and muzzle of cattle

FACE FLY, Musca autumnalis
The face fly (Figure 1) is a common problem for cattle and occasionally horses in the piedmont and mountain regions of North Carolina.

Description and Biology. The face fly was introduced into North America from Europe and entered the United States from Canada in 1952. The fly has since spread across the northern states and southward. The face fly is a common pest of pastured cattle in western North Carolina and an occasional pest in the piedmont. The fly is relatively rare on the coastal plain. Traditionally, face fly population densities on NC cattle are highest in the spring, but may be significantly reduced in number under dry conditions.

The face fly resembles the house fly and is sometimes difficult to differentiate. Face flies belong to the same genus, Musca, as the housefly. Face flies are approximately 6-8 mm long with a gray thorax featuring four black stripes (Figure 2). Females have a black/grey abdomen with a yellow highlights on the anterior portion of the abdomen. 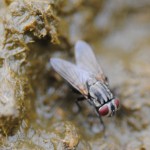 The face fly has sponging mouthparts similar to those of the house fly. Female face flies acquire nutrition from the fluids produced by cattle, usually the tears and mucosa associated with the eyes and nose. Face flies are often seen feeding on mucus that may be transfered onto the haircoat or from superficial wounds on the animal. Flies feeding from the eyes are particularly irritating for the cattle.

The flies’ sponging mouthparts support tiny spine like teeth, which abrade and damage the conjunctiva of the eye. Male face flies spend little time on cattle or feeding on fecal fluids but prefer feeding on flower species found at the pasture margin and fence rows. Large numbers of flies may be observed resting on corral fences or barns when cattle are processed (Figure 4). 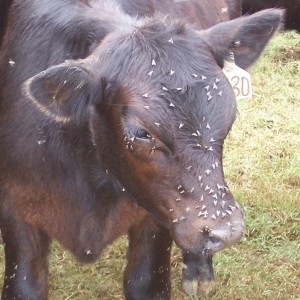 Female face flies lay their eggs on fresh cattle manure soon after the pat falls to the ground (Figure 2). Larval development occurs within the dung pat and larvae pupate in the soil below. Development from egg to adult is completed in 2 to 3 weeks. Successful development of the larval stages is related to dung pat moisture, and percent grain in the cattle diet. Parasitoids have a relatively minor role in mortality of immature stages of the face fly, however predators may be important. Competition for dung pat resources between face flies and other dung insects, like dung beetles, results in stunting of flies and lower adult survival. Adult face flies can travel several miles while searching for new hosts. They are rarely found in buildings during the summer, but readily enter buildings during the fall as large numbers of overwintering adults seek shelter in attics, barns, and older buildings. 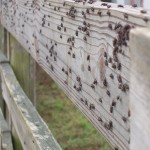 Pinkeye. Face fly populations have been associated with increased incidence of pinkeye and other eye disorders. The irritation caused by the feeding activity of the fly causes tissue damage and provides an avenue for the introduction of pathogens to the eye (Figure 5). Moraxella bovis, the bacterium that causes pinkeye, has been recovered from the crops of face flies and is regurgitated into the eye by the feeding fly. As few as 1-2 flies are sufficient to cause pinkeye and untreated M. bovis infections can lead to blindness in cattle. Infected cattle respond most favorably to oxytetracycline. Moraxella bovis bacterin is available for prophylactic treatment of cattle for pinkeye. Consult your veterinarian for current treatment and vaccine information. 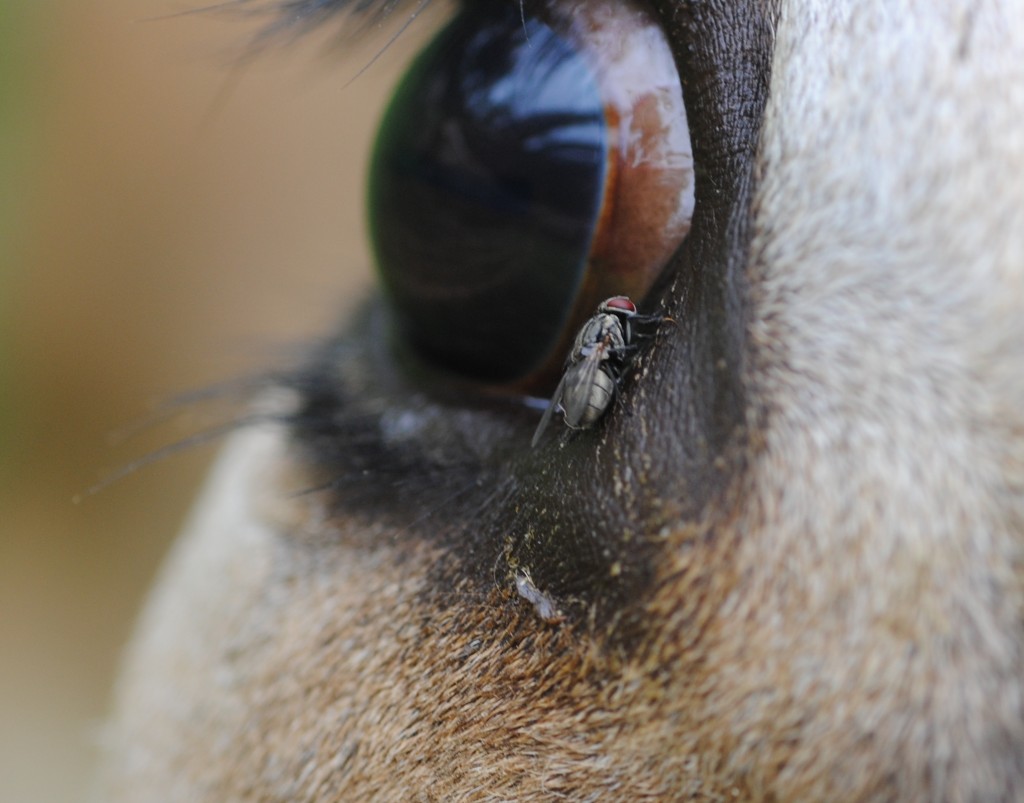 Insecticides. None of the presently available control technologies are completely effective for face fly control. Currently utilized control technologies include a number of self-treating devices such as dust bags and oilers of various designs. Feed-through insecticides, boluses, sprays and ear tags provide limited control. Some of the registered animal insecticides provide aid in control if insecticide residue can be maintained on the animal. If face fly populations are high, control may require more than one method of treatment.

Dust bags are best used in a forced treatment situation where the animal has to pass under them to obtain water, feed or mineral. Backrubbers or oilers can be built by wrapping burlap around a chain, cable, or wire suspended between two sturdy posts. The fabric must be treated regularly to maintain effective use. Commercial oilers are designed to dispense the insecticide from a reservoir. Insecticides for use in oilers may be diluted with diesel fuel to reduce evaporation and extend their life.

Insecticide-impregnated ear tags aid in the control of face flies control but may not be effective against horn flies because of widespread resistance. The pyrethroid and organophosphate insecticide ear tags provide varying degrees of face fly control. When using ear tags, both the calves and cows should be treated.

Feed additive insecticides are incorporated in a bolus, mineral block or added to feed. The insecticide passes through the digestive tract of the animal and into the manure. This prevents any insects from completing development in the manure. Tetrachlorvinphos, (Rabon), diflubenzuron (Dimilin) and methoprene (Altosid) are three insecticides registered for this purpose, but Altosid does not include face fly on the label. These products reduce the number of flies emerging from manure, but this degree of control may be offset by the immigration of flies into the herd from neighboring untreated herds.