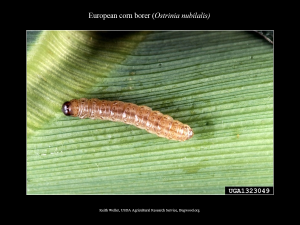 European corn borer (Ostrinia nubilalis) (ECB) has three or more yearly generations in North Carolina. Before the widespread planting of Bt corn, it was one of the most serious pests in the state. It is now rarely encountered and only in non-Bt refuge corn. If corn is planted in a timely fashion, the first and second generation will infest the crop. Late corn may be infested by the second and third generations. Late maturing corn is usually most seriously infested. 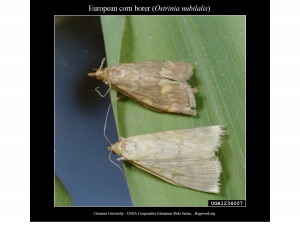 Second generation ECB normally infests corn during the silking stage since silks or pollen make fields much more attractive to egg laying moths. See scouting guidelines for mid-season insects. Corn fields that are close to a source of ECB moths, like infested potato or wheat fields, are most likely to be infested above threshold. Grain loss from second generation corn borer averages around 6% per tunnel/plant but actual losses may be higher or lower. This loss considers only reduced grain yield and harvest loss due to dropped ears and/or lodging can further reduce yield. Second generation ECB tunneling may allow greater infection by stalk rot organisms, hasten stalk breakage, and increase harvest loss. Overall losses with serious infestation of second generation ECB in corn can be considerable (e.g. 25-50 bushels/acre) if yield potential of the crop is high. Third generation ECB may seriously infest late maturing fields. In this instance the larvae are fond of tunneling ear shanks, making the ear more prone to fall from the plant. Also, under very high third generation conditions significant tunneling of the ear may occur that both destroys grain and creates conditions favorable for mycotoxin producing pathogens.

Management of ECB is most successfully accomplished with Bt transgenic hybrids. Effective types of Bt corn are far more effective than insecticide treatment. Farmers are required by law to plant a non-Bt refuge. This refuge may be managed with insecticides and, in a situation of high ECB threat, insecticides may be considered. 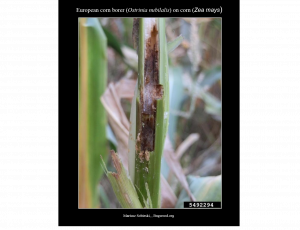 Insecticide treatment for second generation ECB may be profitable if fields which need treatment are properly identified and treated at the correct time. The most successful treatments include aerial application of granular insecticides and ground application with a high clearance sprayer if the corn is not too tall. Timing is critically important since treatment must be done before borers tunnel deeply into the stalk or ear. Thus, timing of insecticides must be on the basis of scouting for egg masses. Although all corn fields in North Carolina are infested with second generation ECB, this pest fluctuates greatly between fields, areas, and years. On the average, most fields will not be economically infested. 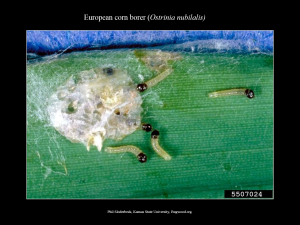 Early planting and stalk destruction may have some influence on reducing corn borer populations. Modern corn pickers destroy a high proportion of borers during harvest, therefore, reducing the overwintering population. Stalk destruction that includes incorporation of residues into the soil reduces overwintering ECB to the maximum, however, this practice increases soil erosion which may off-set benefits derived from ECB control. Stalk destruction may reduce the incidence of first generation ECB infestation on a local basis but has little influence on later generations. The third generation can be a serious problem in late maturing corn by causing ear-drop, but this is easily avoided by planting early and using shorter season hybrids.