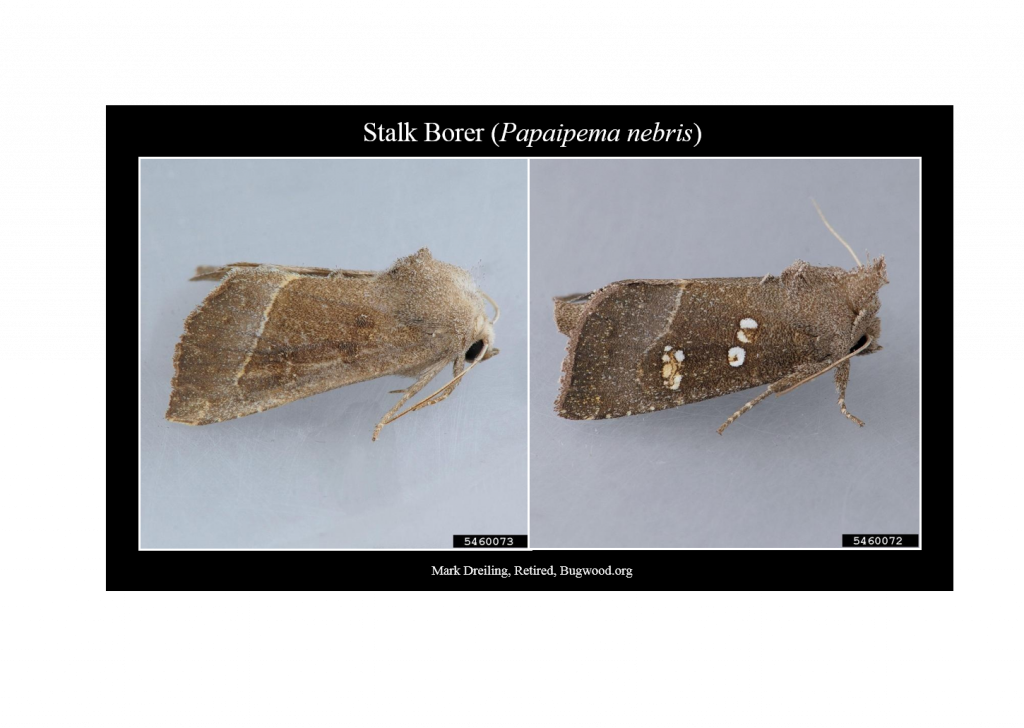 Southern cornstalk borer (Diatraea crambidoides) and the stalk borer (Papaipema nebris) were once frequently found in fields across North Carolina. However, due to the widespread planting of hybrids expressing Bt toxins, they are rarely encountered and only in non-Bt refuge corn. Infestation of these insects in whorl stage corn is usually greatest under certain no-tillage conditions. Southern cornstalk borers overwinter as larvae in the root crown of dead corn plants and corn following corn helps insure a high carry-over borer population within the individual field, especially if no-tillage practices are followed without rotation. Infestation can reduce yield since any plant attacked in the early whorl stage will not be productive. Second generation southern cornstalk borer may infest large conventional or no-tillage corn in late July through August and can reduce yield about 5% per tunnel/plant. Borers infest the brace-root/below ground section of the corn stalk and infestation often goes unrecognized by farmers, even when infestation may be at 100%. The only successful management tool is the use of certain Bt corn hybrids. 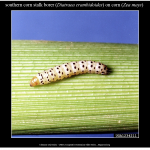 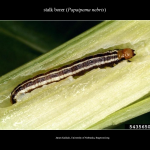 Stalk borer (P. nebris) passes the winter in the egg stage on grasses. After eggs hatch in the spring, caterpillars initially feed on grass but later move to large stemmed plants. In conventional tillage corn this pest is restricted to weedy field borders. However, with conservation tillage, egg and caterpillar carryover may be substantial in fields with certain grasses. After herbicides are applied to kill the existing vegetation, stalk borers are forced to the corn seedlings. Stalk borer tunnel stems and injured smaller plants typically die or have no ear. Stalk borer can be reduced by killing existing vegetation in no-tillage fields at least two weeks before planting.

Insecticide treatment of both southern and common stalk borers can be difficult. Usually, detection of an economic infestation is made after the insects have bored deeply into the plant tissue. If the early leaf feeding (in the whorl) symptoms are recognized, insecticide treatment can be made with a moderate degree of success. All treatments should be made on the basis of scouting information and thresholds. See scouting guidelines for seedling pests.