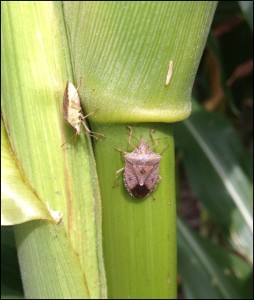 The brown stink bug (Euschistus servus Say) is the primary grass feeding stink bug in North Carolina and can be commonly found in both wheat and corn fields. Both species are bivoltine (two generations) in the state and overwinter as adults in organic residues and litter. Adults emerging in the spring sustain themselves and reproduce on various wild and cultivated hosts before the second generation moves to cultivated hosts. Bugs feed by piercing the plant and sucking the plant juices.

Brown stink bug feeding can be a severe problem in seedling corn, although this is rarely encountered in North Carolina. See scouting guidelines for seedling pests. Bugs feed at the base of seedlings and cause tissue death at or near the growing point (meristem). Damaged plants will die or sucker if the growing point is killed. Stink bug-damaged plants may be deformed and show bands of holes in the leaves, much like billbug damage. When stink bug numbers are high, seedling loss can be severe. High stink bug populations in seedling corn are confined to no-tillage corn planted into soybean/wheat stubble, small grain cover crop, or failed small grain crop (e.g. freeze damaged wheat). In these situations, scouting for seedling pests will detect economically damaging stink bug populations. 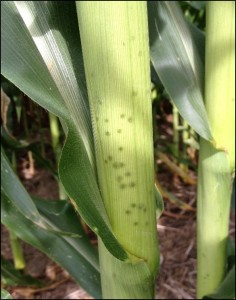 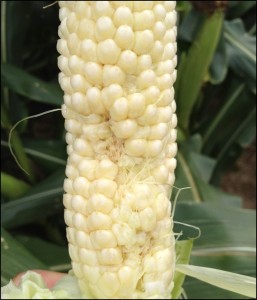 During the season brown stink bug will feed on all plant parts but prefers seedlings and developing grain. Seedlings can be deformed and killed; grain may be aborted from the ears. Damaged ears often crook away from the plant stem as a result of aborted grain and lack of ear elongation on the outside ear surface. Feeding on leaves and stems creates discolored and deformed stippled spots on the plant surface.

Seed treatments may provide protection for a brief time period following emergence. If stink bugs are detected in seedling corn at economically damaging levels, a list of recommended insecticides can be found in the NC Agricultural Chemicals Manual. Stink bug management in corn after layby is not recommended, even though stink bugs can be damaging at this stage, because the available current treatment applications are ineffective.