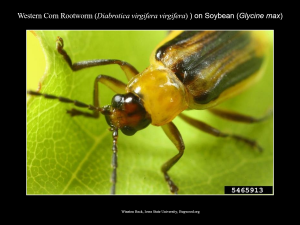 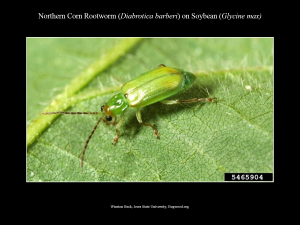 Life History. Both western and northern corn rootworms have a single generation per year and overwinter as eggs that were laid during June and July in corn fields of the preceding year. Since beetles lay their eggs almost exclusively in corn fields, populations of rootworm larvae can be successfully avoided by following a good corn rotation plan. Rotation works well because the rootworm larvae cannot complete their life development on crops other than corn and die soon after hatching, if corn is unavailable. However, in the Mid-West, rootworm biotypes have been found that apparently have adapted to an every-year rotation. These biotypes remain in the egg stage over the following season and hatch the next season when corn is again in the field. Rotation remains an effective management tool for rootworms in North Carolina. 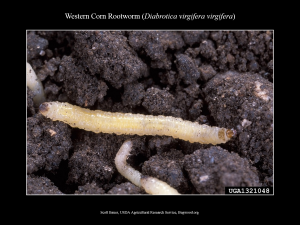 In non-rotated corn, rootworm eggs hatch in the mid-May to early June period and larvae move to corn roots and feed. Rootworms eat root hairs, the softer root tissue, and may tunnel into the roots as the insects become large. Feeding lasts for about three weeks and if rootworms are abundant, most of the plant roots can be eaten or damaged. Corn plants with root damage are easily drought stressed and are often blown over; lodged plants will grow back upright in a curved manner, a condition called “goose necking”. Reduction of grain and silage yield can be substantial. Larvae pupate around the base of corn plants and adult beetles emerge in late June and July. The beetles feed on corn and are attracted to the pollen and silks. Western corn rootworm beetles will also feed on the soft epidermal tissue of leaves, especially tender leaves in the plant whorl, and can cause extensive leaf streaking. However, this leaf streaking is seldom of economic concern.

Damage to Corn. Corn rootworms can reduce yield in two ways. If adult populations are very high, and beetles are present at silking, feeding on the silks can interfere with pollination and ears may have missing grain. However, this is not the most common type of injury. Root feeding by larvae is the most damaging. Corn plants can tolerate some root feeding but plant performance is reduced as root damage becomes more intense. Plants are also more prone to both stress and lodging when populations of larvae are high. Grain yield and silage tonnage can be substantially reduced. Often rootworms have a greater economic impact in silage corn. A system for evaluating root injury has been develop at Iowa State University and the categories are shown in Table 1. A low root rating, usually a 3 or less, signifies very low impact by rootworm larvae. Ratings from 4 to 6 indicate that yield loss has occurred and management efforts are (were) warranted. Farmers can evaluate the impact of rootworms by digging and washing corn roots in late season (e.g. in late July). 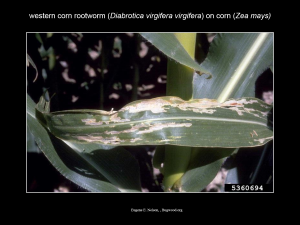 Management. Rotation should be the first line of defense, however, many Piedmont farmers and dairymen may not be able to rotate all of their corn crop. Where rootworms are an economic problem, they can be effectively managed with the appropriate hybrid that produces a Bt protein toxic to the insect. The remaining management option is the use of at-planting or lay-by soil insecticide. In most areas of the country a single application at planting will provide fair to good control of rootworms. Consult a current edition of the North Carolina Agricultural Chemicals Manual for rootworm insecticide recommendations. Using a Bt hybrid targeted for rootworm or a soil insecticide should be based upon some knowledge that corn rootworms are a problem in the area where corn is to be planted in the current year. This data would be gathered in the previous season and consist of: 1. root ratings, 2. surveys of beetle populations on the silks, 3. extensive lodging, and 4. yield information. If these data indicated the likelihood of high beetle populations then they should be managed.