A Surprising Cause of Holes in Pruned Canes

Find this article at:
go.ncsu.edu/readext?257519
— Written By Hannah Burrack

Several years ago, I posted information on NC Small Fruit & Specialty Crop IPM blog about the many “boring” insects that can attack blackberries and raspberries. In that post, I included two images from Gina Fernandez in which something had produced holes in the end of a cane and tunneled a short distance. Nothing was present in these holes. At the time, this damage was puzzling, but this year with the help of some grape growers, I think I’ve figured out who the culprit was. 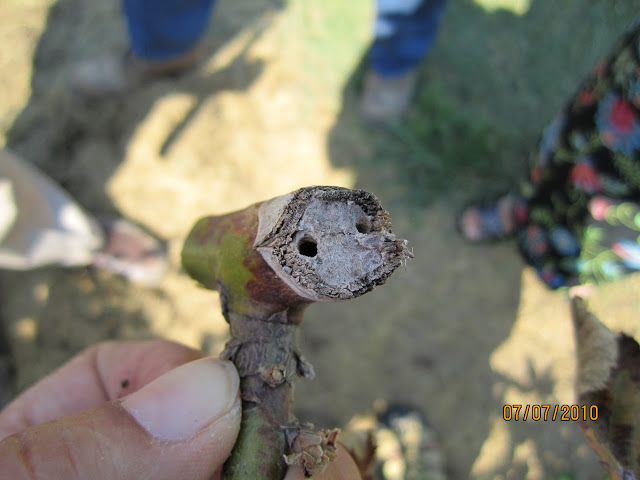 This type of damage is not unique to blackberries and raspberries. I’ve recieved similar images from blueberry and grape growers curious as to the cause of holes in the tips of their canes. A few weeks ago, however, a grape grower sent me an image that helped put the puzzle together. 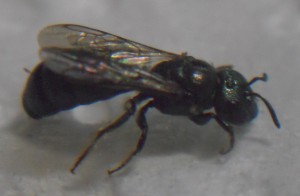 Insect collected from tunnel in pruned grape vine along with larvae. The adults were less than a centimeter long.

The grower had collected the insect from a tunnel in pruned cane and recovered larvae from the same tunnel. The insect was a solitary bee, likely belonging to the genus Ceratina, which are also referred to as small carpenter bees. The grower was prompted to contact me because they were concerned that whatever was tunneling in their vines was causing damage and wanted to determine if management was necessary. Happily, in the case of these bees, the answer is no. They make their nests in dead tissue, excavting the soft center pith of twigs. They then lay eggs in these nests and provision them with pollen and nectar. The bees do not injure the twigs or canes themselves and are likely taking advantage of tip die-back following pruning. In fact, we may be unwittingly creating pollinator habitat when pruning which may be beneficial during bloom!

While twig-nesting bees do not generally cause problems in perenntial crops, the tip die-back they take advanage may be a symptom of a problem in some crops. In caneberries, large pruning wounds facilitate infection by cane blight. To prevent cane blight infection, growers should “pinch” canes when small rather than making large cuts, when possible. When large cuts are unavoidable, fungicides can be applied post pruning to protect open wounds. Infected canes should be removed from fields to reduce inoculum present.