Spotted wing drosophila (Drosophila suzukii, SWD) is an invasive pest of soft-skinned fruits that has been detected throughout the United States in the last few years. 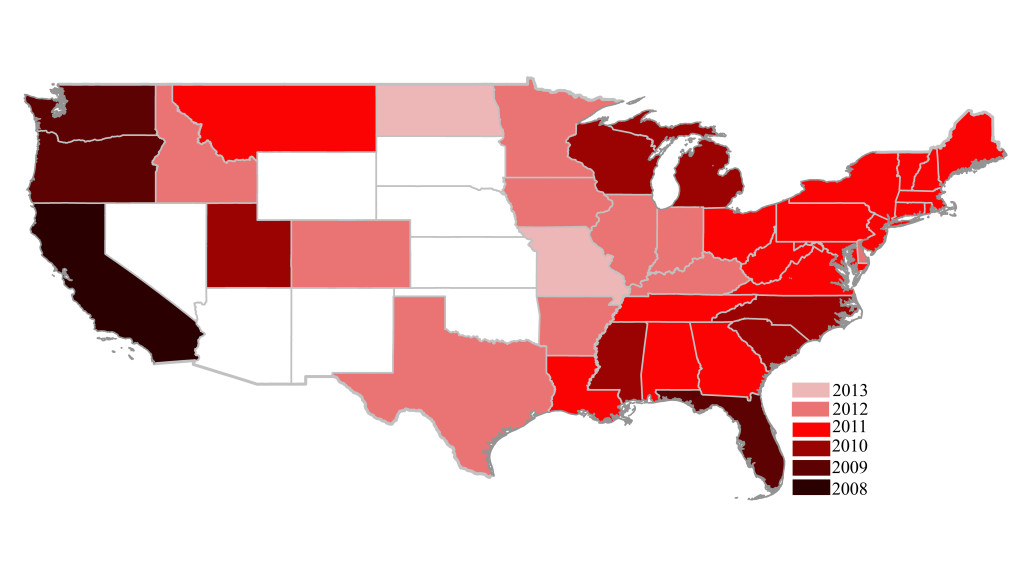 SWD attacks a wide range of soft-skinned fruits including blueberries, caneberries, cherries, grapes, strawberries, and their wild relatives. There is currently a zero tolerance threshold for SWD larvae in fresh market fruit sold in the United States and a single infested fruit can result in the rejection of an entire shipment. This means that SWD has the potential to negatively impact small fruits industries in many states and may even threaten the viability of some industries. In the United States, SWD severely threatens the viability of berry production, most significantly impacting caneberries (raspberries and blackberries), blueberries, and strawberries, as well as cherries.

Small fruits are high value crops, and potential losses may be high. For example, after SWD was widely detected in California, researchers estimated that potential crop losses in strawberries, cultivated blueberries, caneberries, and cherries could be as high as $511 million annually in California, Washington, and Oregon. The total farmgate value for these crops in 2008 was estimated to be $2,577 million, based on data collected by the National Agricultural Statistics Service (Bolda et al. 2010). However, potential crop loss statistics were lacking for the eastern United States.

Potential crop losses in the eastern United States were estimated by the eFly Working Group at a meeting in Raleigh, NC in September 2012. Potential losses in reporting states in 2012 equaled $207 million, based on maximum observed losses and crop values in cultivated and wild blueberries, caneberries, and strawberries. Potential loss data were reported from AR, CT, GA, FL, ME, MI, NJ, NY, NC, PA, SC, and VA. The total crop value for these crops in reporting states was estimated to be $567 million. Cherries are valued at over $40 million in the eastern US, but the 2012 crop was significantly damaged due to late freeze injury. Therefore, cherry totals were not included.

Measures of actual crop loss on state or regional scales were also lacking for both the western and eastern US. Such data have been difficult to obtain for several reasons. First, SWD damage can be hard to detect because some fruits that are infested with eggs and young larvae can still look healthy and edible. Second, damaging populations can build up quickly in commercial fields because adults can reach sexual maturity within two days of emergence and females can lay 300+ eggs each. Finally, available traps and baits are not effective at predicting infestation and several researchers have discovered infested fruit in fields where no flies were caught in traps. All together, these issues have made it difficult to put a price tag on the economic losses caused by SWD and to estimate the full economic impact of SWD in the United States.

The eFly Working Group assessed measurable loses across several crops in the eastern US.

Additional, limited loss data for grapes, cherries, and peached along with case studies from 2012 is available in the full report.

A future goal of the eFly Working Group is to contextualize SWD impacts beyond crop losses and input increases. There has been some effort in the western US to incorporate pesticide use costs, labor increases for sanitation, and price elasticity (specifically potential price increases if crop availability decreases) into SWD impact assessments (Goodhue, et al. 2011). Other potentially important, but as of yet unexplored, aspects of losses due to SWD include:

Gathering information about the impact of SWD in fruit crops is very important. If you or someone you work with were affected by SWD during the past year, please consider taking the 2013 SWD Impact Assessment Survey. Ultimately, your input will help us to contextualize SWD loss data in a more meaningful fashion, to prioritize research objectives, and to better manage SWD in the eastern United States.