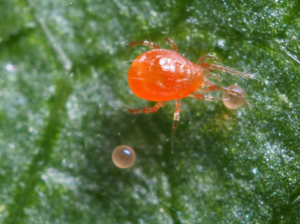 Phytoseiulus persimilis is a specialist predator of spider mites, such as the twospotted spider mite (TSSM, Tetranychus urticae Koch). It is a highly voracious and effective predator on a number of horticultural and ornamental crops and has become a key tool for managing spider mites in greenhouses for several decades (1). Use of P. persimilis in open-field crops is not nearly as common as in greenhouse production systems due in part to environmental and agronomic characteristics as well as a lack of research on how to effectively implement P. persimilis in these systems. P. persimilis has been used very successfully in field-grown strawberries in California and Florida for a number of years, but how this predator can be implemented in other horticultural crops, such as tomatoes, is unknown (2, 3). Throughout the last several years, the Walgenbach lab at NC State has been researching how to augmentatively release tomato-reared or commercially-purchased P. persimilis in staked field tomatoes to manage TSSM, as well as how to conserve P. persimilis populations that are currently established in North Carolina (4). Despite the reported limitations of P. persimilis on tomatoes due to defensive glandular trichomes (2), our research in experimental plots and commercial fields has demonstrated excellent, season-long TSSM control when P. persimilis is applied correctly.

P. persimilis is native to Chile, but was accidentally introduced into Germany in 1959 (1), and has since been distributed globally as an important biological control agent in greenhouses (various crops) and field-grown strawberries. It has become established in the natural landscapes in many parts of the world, including Israel, southern California, Australia, New Zealand, South Africa, and in parts of the southeastern United States, including the Piedmont region of North Carolina (2, 4, 5).

Appearance: Similar to other mites, the life cycle of P. persimilis includes the egg, three immature stages (larva, protonymph, deutonymph), and the adult. Adult mites are approximately 0.5 mm and females are slightly larger than adult males. While small, P. persimilis can be easily distinguished from TSSM and other mites by its bright red-orange and pear-shaped body and long legs, with the front legs projected forward. It also moves much faster than spider mites.

Development: Under hot, humid conditions, P. persimilis can develop from egg to adult in as little as 5 days (6). It is an effective predator of TSSM when temperatures are as low as 60°F and 60-90% relative humidity, with improved performance at higher temperatures and humidity. P. persimilis, like many other predatory mites, is sensitive to humidity, which can be a limitation to their success as biological control agents in field-grown crops. As humidity decreases below 60%, successful egg hatch declines steadily, although eggs can compensate for low humidity as long as it is punctuated by periods of higher humidity (70), which almost always occurs at night in NC. It is also important to note that respiring plants affect the microclimate within a crop, generally increasing relative humidity compared to ambient environmental conditions. 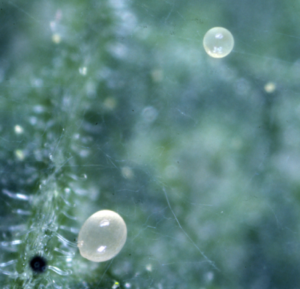 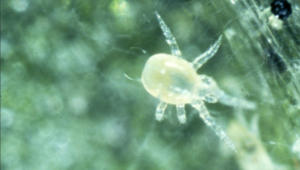 Fig. 3. The larval stage of P. persimilis has only six legs. (Photo: University of Florida, https://mrec.ifas.ufl.edu/lso/spmite/b853a3.htm) 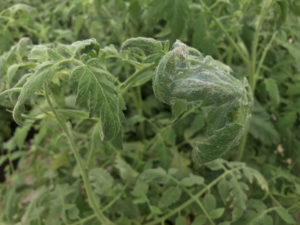 P. persimilis is not native to North Carolina, but in recent years has become established in some parts of the state, such as the Piedmont and Coastal Plain. It was likely established from escapees intentionally released in greenhouses or field-grown strawberries. Resident field populations have been detected each year in numerous tomato fields and have been observed to aid in the suppression of late-season TSSM (August-September) (4). However, their role in suppressing TSSM in tomato is limited by its arrival late in the season (July-September), a period when TSSM populations are typically at high levels. Ongoing research is studying the spatial relationship of P. persimilis infestations to the timing and distribution of populations across the landscape the following growing season. The goal is to devise strategies to allow P. persimilis to enter tomato fields earlier in the growing season and provide more effective early season suppression of TSSM.

Augmentative Biocontrol: Ongoing research in the Walgenbach lab is optimizing how to release P. persimilis in field tomatoes for effective, season-long suppression of TSSM, with the goal to reduce or eliminate the need to apply miticides. Currently, P. persimilis are recommended to be released shortly after the detection of TSSM, when populations are below 0.5 mites per leaflet. P. persimilis are released at a rate of approximately 20,000 per acre. This release rate does not need to be applied to an entire field, but only to a small section (1/10th to 1/20th) of a field. In a released section, the predatory mites will rapidly multiply and quickly disperse to other sections of a field. One experiment conducted in an 3-acre commercial staked tomato field (with no other major TSSM-host plants nearby) demonstrated excellent TSSM suppression by releasing 2,500 P. persimilis in a 0.14 acre section of the field. Importantly, the size of the field and orientation to other crops (TSSM-host plants) may influence how and where P. persimilis disperse, which will influence the timing and extent to which it suppresses TSSM. Ongoing research is determining how these factors need to be considered when P. persimilis are released to ensure reliable TSSM suppression.

Other factors important to the success of released P. persimilis include the environmental conditions and source of P. persimilis. Releases should be early in the morning or late in the afternoon to avoid high mid-day temperatures, and not immediately prior to a major rain event. The source of P. persimilis may also be important, whether they are bean-adapted (from commercial suppliers) or tomato-adapted (cultured in-house). While predators purchased from commercial suppliers have successfully established in tomato fields, ongoing research is examining the relative success of the two strains.

Conservation Biocontrol: Probably the most important factor affecting the success of released or naturally occurring P. persimilis is the type of pesticides used during production of the crop. See Table 1 for a list of frequently used pesticides and their likely compatibility with P. persimilis and other biological control agents in tomato fields.

Future recommendations will be updated with more specific guidelines on how to properly use P. persimilis for TSSM management in field tomatoes. 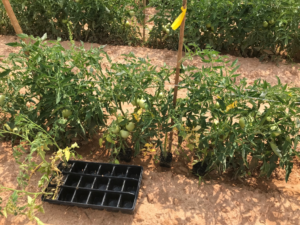 While it is possible to scout for P. persimilis without magnification, they are very small (~0.5 mm) and a low-power hand lens (4X – 10X) can make them easier to see without slowing down the scouting process. As P. persimilis is dependent on spider mites as a prey source, scouting should only occur where TSSM are present. The body is bright red-orange, globular- and pear-shaped, and can have a noticeable shine to it under sunlight. Immature stages are smaller than adults and body color is a less-pigmented, semi-transparent orange-red. Eggs, which do require magnification to see, are approximately 0.33 mm in diameter, oblong, and approximately twice the size of TSSM eggs. P. persimilis is also usually fast moving and when disturbed on a leaf will begin walking significantly faster than other similarly-sized insects and mites present. To scout for P. persimilis in the field, randomly sample 5-10 sites throughout the entire field, at each site inspect the underside of leaves (from the upper third of the plant) from 10 consecutive plants. On a leaflet, P. persimilis are often sheltered in the crevices and pockets created by a curled leaflet. After P. persimilis have been released into a field it typically takes 3-4 weeks for the population to have grown to sufficient abundance to be detected by random sampling.

It is always best to confirm the identity of P. persimilis using a 10X visor or hand lens, and collecting several mites in a container with alcohol for further inspection, if needed. In late-Summer/early-Fall, TSSM will increasingly take on an orange-red color due to the accumulation of keto-carotenoids ahead of winter, making it increasingly important to differentiate P. persimilis with magnification. 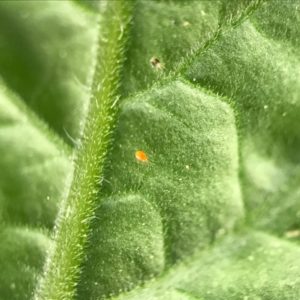 Fig. 7. P. persimilis (middle) and TSSM (top) on the underside of a tomato leaf, viewed under a 10X hand lens (Photo: Tom Bilbo) 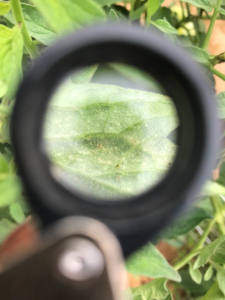 Pesticide Toxicity to P. persimilis and other predators