Find this article at:
go.ncsu.edu/readext?686064
— Written By Michael Waldvogel

The news media are reporting that the Asian giant hornet (Vespa mandarinia) has been found in Washington state. This hornet lives up to its name because the queens are more than 2″ long while the workers are about 1 1⁄2″ long. The “murder hornet” nickname given by the media really refers to their well-deserved reputation as a pest because they attack and can destroy an entire bee colony. 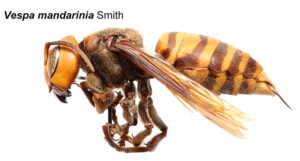 So far, the only reports of the Asian giant hornet in North America are from the Pacific Northwest and southwestern Canada (2019), although it is believed that colonies in both locations have been eradicated. The hornets are not in North Carolina.

However, over the years, we have received numerous calls and emails from people about finding “Japanese Hornets.” and the same is happening right now. In every case, what people were seeing were European hornets, Vespa crabro, which is no wimp itself. 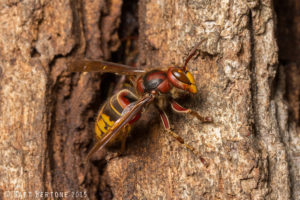 European hornet queens are busy building nests which may be hidden in hollow sections of a tree trunk or in attics. If you see large wasps entering holes/gaps in roof fascia and soffits or going under decks, that is often a sign that there is a nest. Although it will take several weeks for the numbers of new workers to start increasing, NOW is the time to act before their colonies begin to grow and produce workers that will defend the nest aggressively (based on first-hand experience!). Watch for signs of wasp activity in and around your home. According to data publish by the CDC for the years 2000-2017, an average of 62 people died annually from bee/wasp/hornet stings in the U.S. with about 80% of those cases being males. A study1 published in 2014 estimated that there are about 220,000 ER-visits annually due to bee and wasp stings.

Asian giant hornets are not an issue for us at this time and not likely to be one in the near future barring some accidental introduction (as was likely the case in Washington). However, everyone needs to be aware that we have a resident hornet species that, at first glance, appears similar to the Asian giant hornet. As with any bee/wasp/hornet sting, the greatest threat is for people who are highly allergic need to be careful outdoors. Regardless of whether or not you are sensitive to such stings, always be careful and watch for signs of bee/wasp activity. Use caution when approaching a wasp/hornet nesting site and be careful when working outdoors on items that have not been disturbed for some time (like piles of wood). If you find a wasp that fits the description of the Asian giant hornet, contact your local County Cooperative Extension Center. You can also submit images online to the NC Plant Disease and Insect Clinic (NCPDIC).

If you are a beekeeper, you can check out Asian Giant Hornets Not a Problem for NC Beekeepers…yet? by Dr. David Tarpy.

You can also read a blog post by Dr. Matt Bertone, Director of the NC Plant Disease and Insect Clinic. Plus, we have information about the European Hornets in North Carolina.