To advance our understanding of the ongoing effects of spotted wing drosophila in host crops, we have produced impact statements for the 2012 and 2013 growing seasons. Our 2012 Impact Statement was developed by surveying entomologists throughout the eastern United States about their state-level observations, and our 2013 Impact Statement summarized the results of a national stakeholder survey. To determine the effects of SWD during the 2014 growing season, we again conducted a national survey of stakeholders, using the same form as during 2013. Surveys were made available online and at grower meetings. Surveys at grower meetings were conducted from January 9 through March 8 2015. The online questionnaire was made available at the eFly SWD Working Group website and emailed as a link to grower email lists, grower organizations, and cooperative extension agents. Online responses were collected from December 11 2014 through February 13 2015.

A total of 436 individuals responded to the survey; 144 respondents completed paper copies at grower meetings and 292 filled out the survey online.

Survey respondents were from at least 31 different states (Figure 1); four respondents declined to provide their location. 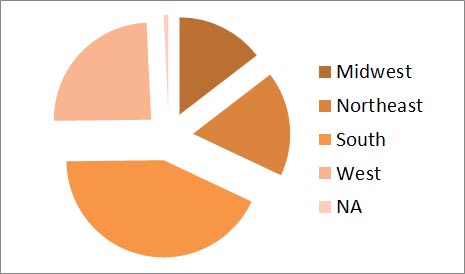 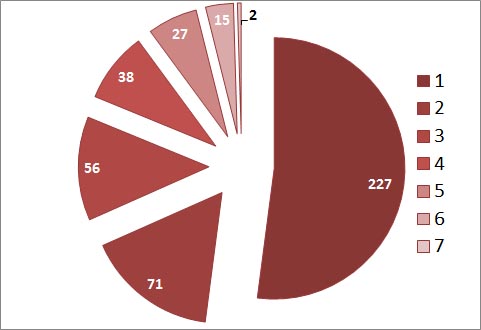 Potential crop losses were also calculated based on the total value of a crop within reporting states with greater than three respondents and the average percentage loss observed across all states. In the case of blueberries, blackberries, raspberries, cherries, and grapes potential losses were higher than observed losses. However in the observed losses for strawberries was higher than averaged potential loss, due to particularly high loss percentages in some states (Table 5).

Table 2. Estimate crop loss due to SWD in blueberries, 2014.

Table 3. Estimated crop loss in blackberries due to SWD, 2014.

Table 4. Estimated crop loss in raspberries due to SWD, 2014.

Table 5. Estimated crop loss in strawberries due to SWD, 2014.

We further compared the effect of farm size on reported crop loss across all reporting growers (Tables 8-13). In general, small farms experienced higher crop loss than larger farmers across, and small farms were also more likely to experience 100% crop loss due to SWD than were larger farms. At least one blueberry, blackberry, or raspberry grower reported 100% crop loss, but no strawberry, cherry, or grape growers reported total crop loss. This suggests that SWD damage may be more severe in blueberries, blackberries, and raspberries than in the other reported crops.

Table 14. Input increases associated with spotted wing drosophila summarized by crop. Note that growers were asked about input increases across their entire farm, not for individual crops. Categories with fewer than two responses are indicated by -.

Respondents were also given the opportunity to include comments. Frequent comments expressed a desire for better insecticides but also for ways to reduce the amount of insecticide needed, through improved materials, better application methods, or non-chemical controls. Several commenters indicated that damage on their farm was less severe in 2014 than in 2013, but they also indicated that they have reduced losses as compared to previous years through increasing pesticide use and labor, as reflected in the responses summarized in Table 14.

More stakeholders completed the 2014 impact assessment survey than in the previous year, 436 compared to 249. This high response rate underscores the continued significance of SWD for berry and tree fruit growers.

Despite some grower comments that SWD losses were lower in 2014 than in 2013, the average percentage crop loss reported increased for all host crops (Table 15).