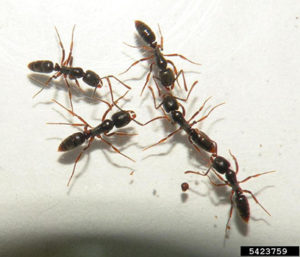 Though first reported in the United States in the early 1930s, Brachyponera chinensis, commonly known as the Asian needle ant, has only been recognized as a pest here since 2006. Native to Asia, this introduced ant has now been documented in North Carolina, as well as Alabama, Florida, Georgia, South Carolina, Tennessee, Virginia, Connecticut, and New York. This species is an unusual pest because unlike pest ants such as the fire ant and the Argentine ant associated with areas that have been disturbed by human activity, the Asian needle ant is able to nest in both disturbed and “natural areas” like forests. This ant has been found in various settings from school cafeterias to residential lawns to logs in State and National Parks.

The Asian needle ant poses a triple threat to humans. First, its venomous sting is painful, and on average, somewhat more likely to cause an allergic reaction than the venom in a honey bee’s sting. As a result, people allergic to insect stings should take special care to avoid stings when in an Asian needle ant-infested area.

The second emerging impact posed by the Asian needle ant is its ability to infest homes. Their colonies are much smaller in population size than more commonly recognized house pest ants like the Argentine ant or the odorous house ant. However, the Asian needle ant has increasingly been found pilfering food from school cafeterias and residential kitchens. While having ants crawling on food is a nuisance, the primary threat is the increased likelihood of people being stung. 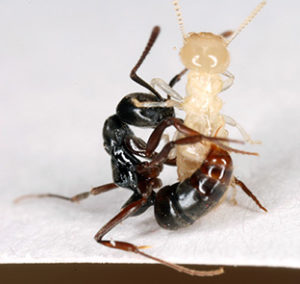 Asian needle ants prey on termites and other insects

The third, and potentially greatest, negative impact posed by the Asian needle ant is its potential to devastate a natural environment by excluding native ant species and termites. Our native ants play essential roles in maintaining the status quo of the forest ecosystem and Asian needle ants either directly eat them, consume their food, or take over their nest sites. When the Asian needle ant eliminates the native species or reduces their abundance, many roles, like seed dispersal and predation of forest pests, are left unfilled.

The Asian needle ant is a medium-to-small-sized ant, with workers and queens measuring 5.0 to 6.5 mm (1/5″) in length. That means workers are smaller than carpenter or wood ants (Camponotus spp. or Formica spp.) but larger than “sugar ants” (Linepithema humile or Tapinoma sessile). Workers and queens are very similar in appearance. Individuals are relatively long and slender, dark brown to black in color, with legs and mandibles that are a lighter brown to orange-ish color.

Asian needle ants can also be distinguished from other ants because they have an inability to cling to smooth surfaces like glass. By carefully capturing an Asian needle ant in a glass jar, one can observe that, unlike other ants that will climb the sides of the jar, the Asian needle ant will make a few futile attempts to climb before confining itself to the base of the jar.

This species prefers to nest in moist, damp areas like the insides of rotting logs, leaf litter, beneath rocks, and in loose soil, but will also nest in man-made structures, like around sprinkler systems and inside pavement crevices. Colony size can vary from relatively small (tens of individuals) to large (thousands of individuals). Colony territories may range from several nests around the base of a single tree to several nests in a few adjacent logs along the forest floor. Their colonies are “polydomous” meaning that one colony consists of several nests. They are also “polygynous” which means the nests have several queens at the same time. The number of queens decreases over the summer when  alate (winged) ants are produced.

The Asian needle ant apparently prefers termites as a food source but has been found scavenging on a variety of arthropods and other invertebrates such as crane flies, crickets, cockroaches, beetles, grasshoppers, collembolans (“springtails”), spiders, centipedes, earth worms and other dead organisms. This species also directs colony members to sugar sources like apple jelly and scavenges food particles from human trash bins.

While they are not aggressive as are fire ants and generally attempt to flee contact with humans, they will sting when pressured. The majority of stings from Asian needle ants occur when humans accidentally place their hands in nests or on ants, applying pressure to the ant that evokes a defensive sting. Because of this, it is wise to wear thick gloves when handling mulch, moving debris or placing one’s hand in dark areas that might be infested by Asian needle ants.

At present, there is no formalized management recommendation. However, because this species is predatory and scavenges on invertebrate carrion, it has been noted that they will recruit to protein-based insecticide baits. Professional products such as Extinguish Plus®, Advion® Fire Ant Bait, Optigard® and Maxforce FG® are suitable baits for this pest. For homeowners, some of the fire ant baits such as “Amdro”, should work. It is important to think in terms of *management* rather than eradication. 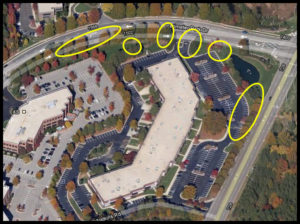 Recommendations for the use of pesticides are included in this publication as a convenience to the reader. The use of brand names and any mention or listing of commercial products or services in this publication does not imply endorsement by North Carolina Cooperative Extension nor discrimination against similar products or services not mentioned. Individuals who use pesticides are responsible for ensuring that the intended use complies with current regulations and conforms to the product label. Be sure to obtain current information about usage regulations and examine a current product label before applying any chemical. For assistance, contact your county Cooperative Extension agent.