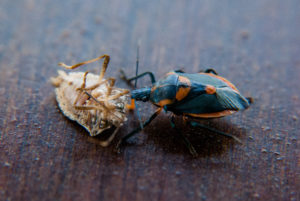 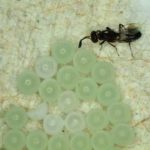 Biological control through natural enemies has the potential to suppress brown marmorated stink bug (Halyomorpha halys, BMSB) populations over a large landscape scale. Natural enemies include predators (beneficial insects that eat a pest or its eggs) and parasitoids (insects that lay their offspring in, on, or near a host pest or its eggs, resulting in the offspring developing and feeding on the pest). Both types of natural enemies kill at least one life stage of the pest.

In its native Asia, BMSB is not a major pest, partly because tiny wasp parasitoids destroy large numbers of BMSB eggs. These parasitoids can lay their offspring inside the eggs of insects, including brown marmorated stink bugs. Asian parasitoids were not present in North America when BMSB was accidentally introduced, so BMSB was able to spread unchecked. 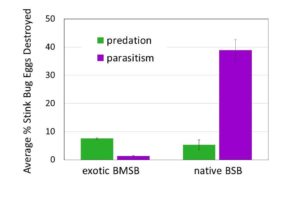 The effects of native predators and parasitoids on the exotic brown marmorated stink bug (BMSB) versus the native brown stink bug (BSB). Citation

There are a number of predators and parasitoids in North America that effectively control native stink bugs, but in most areas they have only a limited impact on populations of the exotic brown marmorated stink bug. However, we continue to study these native natural enemies in hopes of improving their effectiveness in controlling BMSB.

NATIVE PREDATORS: Research by other labs in the southeast and mid-Atlantic have identified a wide variety of generalist predators that consume BMSB eggs. The list includes certain species of crickets, katydids, ground beetles, lady beetles, earwigs, ants, assassin bugs, mantids, and jumping spiders, as well as less familiar insects such as minute pirate bugs, lacewings, and damsel bugs. To monitor predator populations in North Carolina, we deploy yellow sticky cards for one-week periods in both managed and non-managed landscapes. Cards are returned to the lab and all significant specimens are recorded. 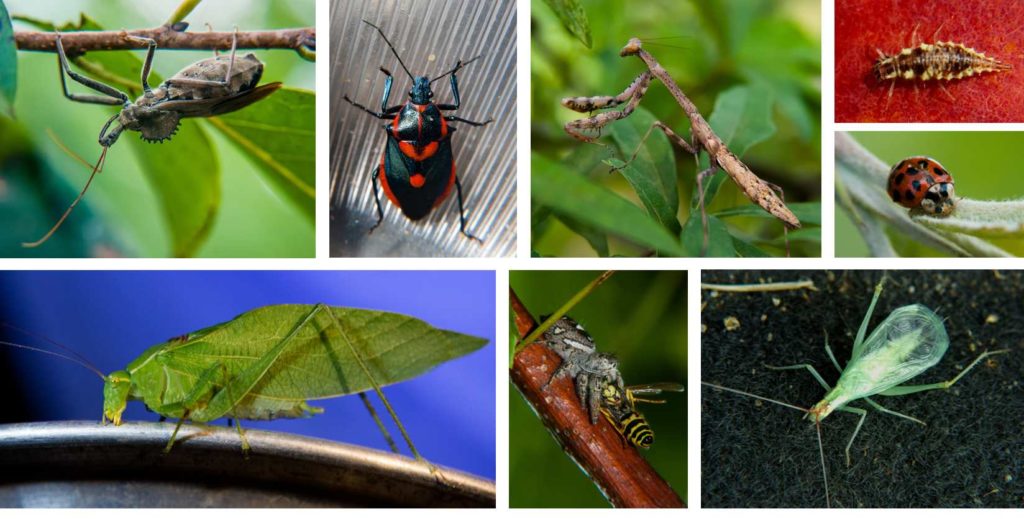 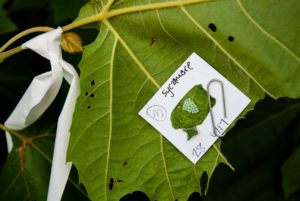 NATIVE PARASITOIDS: Parasitoids are monitored with both sticky cards and laboratory-produced “sentinel” BMSB egg masses, which are placed on a variety of host trees and crops. Sentinel egg masses are collected and brought back to the lab before any BMSB or parasitoids hatch. Any parasitoids that hatch from sentinel eggs are identified to species. So far, only native species of parasitoids have been detected in North Carolina:

Telenomus podisi is plentiful in North Carolina but is not very successful at parasitizing brown marmorated stink bug eggs, although it readily parasitizes and hatches from the eggs of a native pest, the brown stink bug. In the lab, Anastatus reduvii parasitizes all the BMSB eggs that are given to it, but it parasitizes only a very small percentage of sentinel BMSB eggs placed in the field. A. reduvii lives in wooded habitats and therefore rarely encounters BMSB eggs laid in or near crops. We are further studying the biology of A. reduvii and investigating the potential of this native parasitoid for more successful control of BMSB in the future. xxxxxxxxxxxx 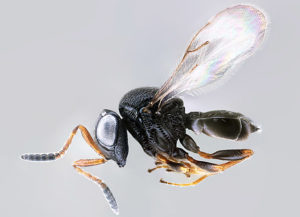 TRISSOLCUS JAPONICUS: Our lab has also discovered the natural expansion of an exotic parasitoid, Trissolcus japonicus, into North Carolina. Also called the “Samurai wasp,” this stingerless, flea-sized parasitoid (<1-2mm long) coevolved with BMSB in Asia and is much more effective at controlling BMSB than native North American parasitoids and predators. In 2014, T. japonicus was found in the US through accidental introduction, presumably having arrived with BMSB. It has since been found in the wild in thirteen states and is being studied in quarantine at USDA facilities. By law, T. japonicus may be released in states only where it has been found naturally. Since discovering T. japonicus in NC, we hope to begin researching the best ways to harness its potential as a biological control agent, just as states like Michigan have been doing. 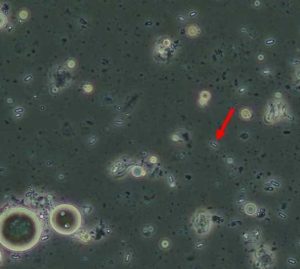 Spores of Nosema maddoxi, a microsporidian, infecting an adult BMSB. Spores are the small, cylindrical, capsule-shaped objects, one of which is indicated by the red arrow. Photograph taken using a microscope with phase-contrast at 40x. (Photo: Emily Ogburn)

LABORATORY COLONIES: We also rear lab colonies of native wasp parasitoids (primarily A. reduvii) for continued research into their ecology and biology. We are researching differences in parasitoid and predator control of BMSB eggs in different crops in North Carolina, and we have performed bioassays on the effects of organic pesticides on native parasitoids. Future research will focus on understanding how management practices can increase natural enemy effectiveness in North Carolina agricultural systems.