Does Bee Diversity Change How Pollinators Behave in Blueberries?

Find this article at:
go.ncsu.edu/readext?256508
— Written By Hannah Burrack

Bees are essential for blueberry pollination in addition to many other crops, and since 2009, we have conducted research to understand who the important pollinators are in North Carolina blueberries. This was the focus of recent masters student Shelley Roger’s thesis, which addressed three key questions: What bees are present in NC blueberries? How do those bee species perform as pollinators? And how do species interactions influence pollinator performance?

In the next few posts, we’ll highlight some of the useful results from this work. First we’ll address the question: Do bees behave differently when interacting with other species in blueberries?

We suspected that a diverse pollinator community was also beneficial for blueberries, and we wanted to determine if similar mechanisms contributed to these benefits. 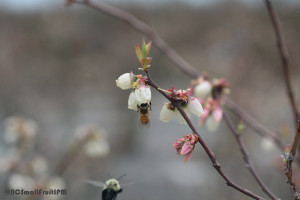 In order to measure bee interactions, screen houses were stocked with honey bees and commercially available bumble bees  (Bombus impatiens) and provisioned with artificial feeders. Honey bees did not act differently when encountering other honey bees or bumble bees on the artifical feeders. They were more likely to leave the “flowers” when interacting with either than if left uninterupted. Interestingly, however, bumble bees were more likely to leave an artificial feeder when interacting with a honey bee than following an interaction with another bumble bee.

Next, we’ll look at differences in pollinator performance in blueberries.