Other Moths That May Be in Grape Root Borer Traps

A grower who recently started monitoring for grape root borer moths in their vineyard sent me images of moths he’d captured in traps yesterday, wondering what they were. 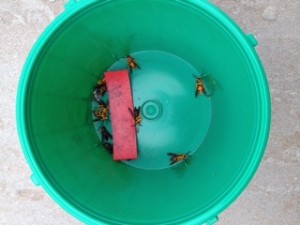 We typically do not capture grape root borers until July, and the moths in the traps certainly did not appear to be grape root borer moths, which are brown with yellow bands across their abdomen. 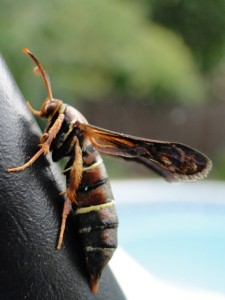 I was stumped because I could not find any images resembling these moths in my go-to online image databases, so I contacted Matt Bertone in the NCSU Plant Disease and Insect Clinic for assistance. With the assistance of GigaPan images from the NCSU Insect Museum, Matt was able to narrow down the likely candidates to the red oak clear wing moth. In fact, one of the specimens (see the snapshot zoom) in the Insect Museum was collected by faculty member John Meyer from a grape root borer trap! 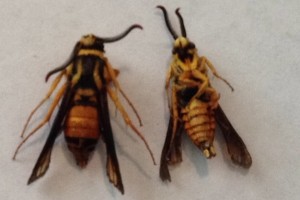 We can add the red oak clear wing moth to the other “look-alikes” that may potentially be found in grape root borer traps. Growers monitoring for grape root borer should be prepared to distinguish between these species.

Do it yourself: Grape root borer monitoring – Entomology Portal