Find this article at:
go.ncsu.edu/readext?373974
— Written By Dominic Reisig and last updated by Carol Hicks

A number of folks are concerned about sap beetle injury this year. Sap beetles are secondary pests. That means that they feed once something else has already damaged the kernels. We’ve seen experiences a fair bit of earworm injury this year on hybrids with dual-protein Bt’s. This is something that is probably NOT a concern of for yield from the earworm side, but sap beetles can move in behind earworm injury and feed on the injured kernels, causing some yield loss and increasing the risk for aflatoxin contamination. I’ve also received some reports of fall amryworm injury, with sap beetles causing the same problems. What can be done? 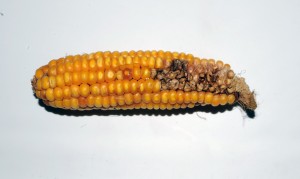 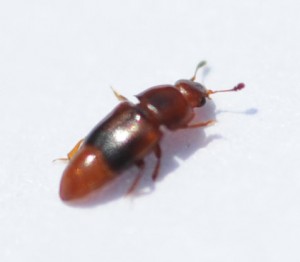 1. Identify the problem. Sap beetles hollow out kernels, rather than completely consuming the kernels. The adults are small black beetles and the larvae are small white worms. Again, these are secondary feeders that often follow worms. Earworms typically feed at the tip of the ear, whereas fall armyworms will feed throughout the ear and often leave holes that are drilled into the cob and dry powdery residue reminiscent of powdered milk.

2. Adjust your harvest. The longer corn sits in the field, the more it is exposed to sap beetle feeding. Turn up the blower on the combine to get rid of out insect-damaged kernels and their associated mess. Recent research out of Georgia shows that there is more insect injury and aflatoxin on field edges. Consider separating corn harvested from field edges from that in the interior.

3. Protect corn as it enters the bin. If sap beetles are still present after harvest, they can be managed as it is going into storage. Note that this information is from Dr. Mike Toews at University of Georgia. Actellic at the highest labeled rate can be effective and long lasting. Finding the product may be tricky, so be sure to work with your distributor if you think you might have a problem. Hook a sprayer up (ATV sprayer is fine) with a nozzle directed at the grain on the bottom of the auger. The goal is to contact every single seed with the material. As the auger delivers the seed up to the bin, it will mix the material onto the seed. Aim to deliver 5 gallons of material for every 1,000 bushels of grain. Centynal is an alternative product that can be used, but it is not as effective as Actellic. Malathion is ineffective.

4. Buy an appropriate hybrid for 2016. Since sap beetle is a secondary pest, you can avoid problems by hybrid choice. Choose a hybrid with effective control of corn earworm and fall armyworm. The best choices to manage these pests are Agrisure Viptera (3110, 3111, 3220) and Optimum Leptera. Optimum Intrasect, Genuity VT Double PRO, and SmartStax are usually good choices except under high insect pressure. All three of these products experienced earworm control problems in areas of our state during 2015, but looked very good in other areas. Finally, since some hybrids have a characteristic where the cob tip is exposed out of the husk, chose one where the tip is the least exposed.