Find this article at:
go.ncsu.edu/readext?421855
— Written By Jeremy Slone and last updated by Michael Waldvogel

Our laboratory has recently published a study which measured the differences between our current integrated pest management (IPM) recommendations for tobacco insect management and what growers actually do. This was the topic of Jeremy Slone’s master thesis and is summarized below. – Hannah Burrack.

What is IPM, and why does it matters?

IPM is a broad term for a systematic approach to managing crop pests using all available tools. This may mean enhancing the populations of predatory or parasitic insects that help control crop pests, completely removing crop material at the end of the season, or applying chemical treatments. Taken together, this approach aims to be the most environmentally and economically sustainable option. An economic threshold (ET) is population density of a given pest where the loss due to damage exceeds the cost of management, including application and pesticide cost. Using ETs to time pesticide application can help to reduce input costs.

While ETs are available for key tobacco pests, many are over 40 years old, and their efficacy under current production practices is unclear. To make matters more complicated, the number of NC tobacco farms has declined rapidly in recent decades while acreage has remained fairly constant. From 2002-2012, there was a nearly 80% reduction in the number of farms! This means that the average acreage per farm has risen, and fewer growers are managing larger farms than when these recommendations were established. Production changes such as these likely influence the way that a tobacco grower approaches pest management.

Throughout the course of my graduate research, I aimed to better understand the inputs required to manage key pests in tobacco using the available ETs. I was also interested in how and when NC tobacco growers were making decisions to treat for pests.

Preliminary studies conducted during 2013-2014 at two NC research stations (Upper coastal plains research station in Rocky Mount and Lower coastal plains research station in Kinston) demonstrated that budworms and hornworms could be managed with approximately 1-2 foliar applications of insecticides during a growing season. Treatments were only applied when caterpillar pests exceeded the ET. However, I was concerned that these small plot experiments may not be applicable for large scale tobacco production.

To verify these results at a grower relevant scale, I conducted a series of experiments using paired fields at grower farms. The goals of the project were to evaluate IPM recommendations, while also comparing fields managed at grower discretion (Gower Standard) and fields that were managed strictly according to IPM recommendations. During 2014-2015, we evaluated two fields at each of several farms throughout NC. 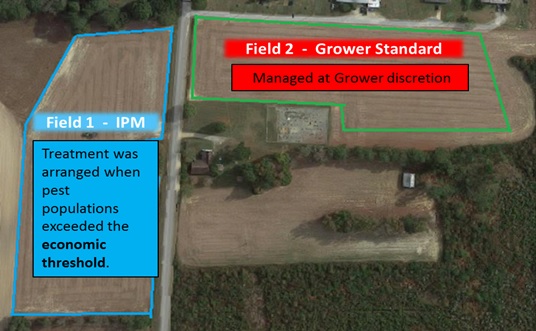 Paired fields were scouted weekly at all grower sites.

Plants were inspected at multiple stops on a weekly basis to determine pest presence at all farms. Stops were made randomly throughout the field, and the frequency of stops within a given field was determined based on field size, according to IPM recommendations. IPM fields only received insecticide applications when pests exceeded ETs, while Grower Standard fields were managed at grower discretion. All but one IPM field received greenhouse treatment with neonicotinoids, but no IPM field received soil applied insecticides. 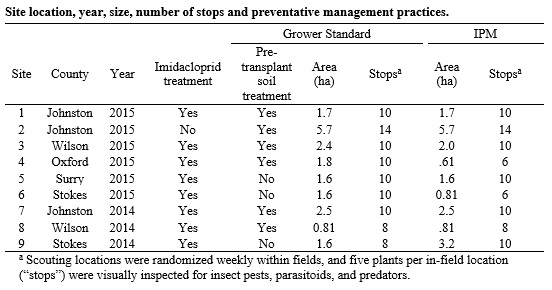 The results of our study have just been published in the Journal of Economic Entomology. IPM Fields that received treatment only when pests exceeded economic thresholds received on average, two fewer chemical applications during the season when compared to Grower Standard fields. These differences in application frequency revealed several benefits from IPM based chemical management. There were fewer pesticide residues on dried leaves in the IPM fields and greater predatory stilt bug populations in IPM fields, all without a statistically significant impact on average pest populations or total yield. 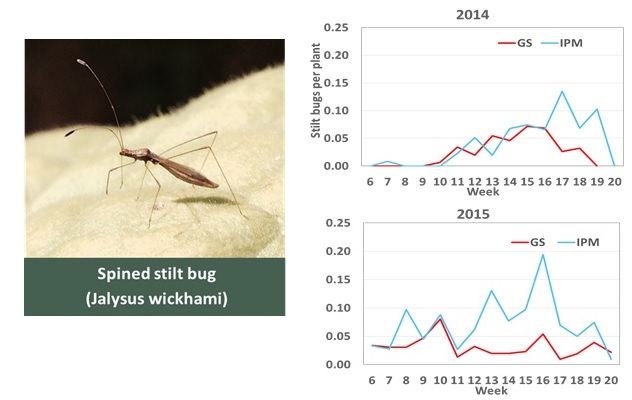 Average total yield (kg) per plant from all harvests for all sites.

Although there are labor costs associated with scouting fields on a regular basis, as is required for IPM, the typical cost of management in grower standard fields was higher due to a greater number of pesticide applications. In our economic assessment, scouting costs for 17 weeks averaged $10.20 per acre, assuming a wage of $12/hour. This expense was included in IPM input costs in the table below, and all other costs were attributed to pesticide material cost and application labor. 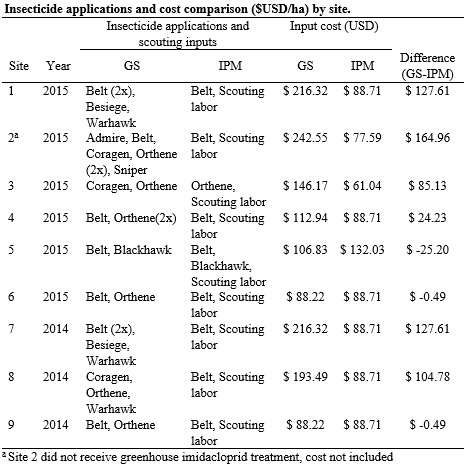 This project demonstrated how IPM based chemical management could save growers money, especially in years when crop value is reduced. These practices did not impact yield and have the potential to strengthen the populations of predatory insects.