Find this article at:
go.ncsu.edu/readext?459883
— Written By Steven Frank

I got reports from Area Specialized Agent Danny Lauderdale that red headed flea beetle adults are active in eastern NC. Danny has been monitoring these pests closely and found active larvae in early March. Now, at just over 500 GDD in eastern NC, nurseries are starting to report adults. 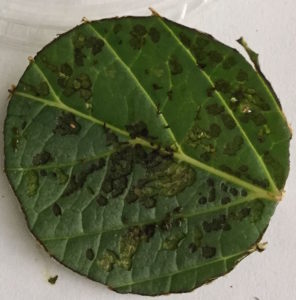 Adult red-headed flea beetles are small, shiny black, beetles with reddish to dark colored heads, and long antennae. If you try to get a closer look and a small black insect, 1/8 of an inch long, and before you can see the red head it is gone, it’s probably a flea beetle. As the name suggests they jump great distances when approached. There are at least two generations in the Mid-Atlantic region and probably more in the South.

Red-headed flea beetles seem remarkably tolerant of insecticide residue. In our research, even relatively effective insecticides, such as dinotefuran, acephate, and some pyrethroids, which killed almost 100% of beetles the first day after application killed very few just a week or two later.

Other posts from our site and a great set of resources from Danny including a scouting video and article could help you manage these pests.