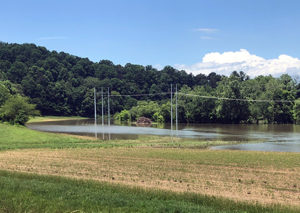 The intense rainfall, flooding and mudslide  damage  in western North Carolina and other areas of the state have created abundant mosquito breeding grounds that will make recovery efforts even more unpleasant. While the waters may recede from view, mosquito populations are likely to spike in the next 7-14 days. The first line of defense for people working outdoors is personal protection – using insect repellents. Working long hours in the heat and high humidity will reduce the durability of repellents. So, it’s important not only to keep hydrated but also to keep well-protected. Remember that repellents can be put on clothing and exposed skin, but should never be applied to skin covered with clothing. With the school year rapidly drawing to a close, children will be spending more time outdoors as well. It’s important that they use repellents as well particularly as we get closer to July when mosquito-borne diseases such as West Nile Virus, Eastern Equine Encephalitis and LaCrosse Encephalitis, are more likely to show up. This doesn’t mean every mosquito is carrying one of these diseases, but simply that common sense + caution is advised.

Information about mosquitoes and mosquito control

Aside from mosquitoes, other insect and vertebrate pests can cause problems in storm-damaged areas over the next few weeks, particularly where electrical power is out and can hamper recovery efforts and in agricultural communities where water-logged crops start to decay and fields are still too wet to plow. Many of these pest problems are described in “Pest Problems After Storms and Other Disasters.”