The first confirmed adult spotted-wing drosophila (SWD) in commercially grown blueberries for the 2019 growing season was captured early this week. While trap captures at this location were low, roughly three flies in 20 traps, this detection indicates that now is the time for blueberry growers to begin more aggressively managing SWD. 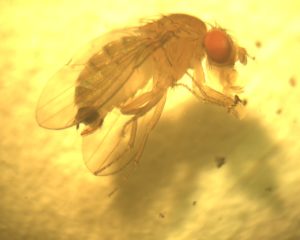 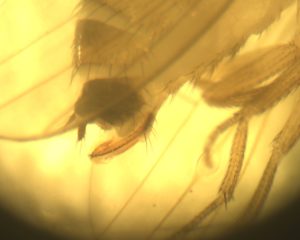 How were these flies captured?

The grower who captured these flies used a homemade SWD trap similar to the one described in this video from my colleague Ash Sial at the University of Georgia. Either a homemade yeast, sugar, and water mixture or commercial lures from Scentry Biologicals are the most effective lures to use in these traps. We have compared both these attractants in blueberries and blackberries and see very similar results.

What type of management action should be taken?

Now that adult SWD have been detected in blueberries, efforts should begin to protect ripe and ripening fruit from infestation. Our recommendations are to make weekly application of effective pesticides once ripe fruit are present. Effective materials are listed in the NC Agricultural Chemicals Manual. When comparing pesticides, take note of the preharvest interval (select materials with PHIs of 3 days or less), if materials are acceptable for use on fruit that may be exported (refer to the Global MRL Database), and plan to rotate between at least two different modes of action (IRAC MOA codes) to reduce the pressure on flies to develop resistance.

In addition to pesticides, harvest management and post-harvest storage are also important tools to control SWD. Fruit should be picked as frequently and thoroughly as possible to reduce the time it is exposed to egg laying flies and the time that any eggs that are laid in the fruit have to develop into larvae.

Once fruit is harvested, they should be stored as cold as possible for as long a feasible. We’ve found that temperatures below 36°F essentially stop egg and larvae development and that many eggs and larvae die after 5 days at 36°F or lower.