Find this article at:
go.ncsu.edu/readext?608623
— Written By Michael Waldvogel 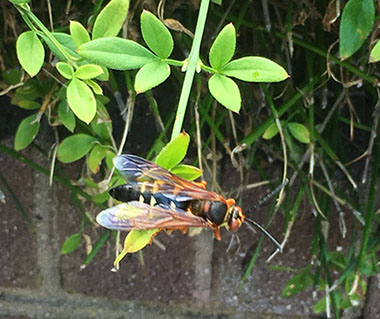 Cicada killer wasps are starting to emerge. This picture was taken on Friday in a landscaped area outside the Cumberland county courthouse. A previous report that I received about a week ago concerned cicada killer activity in a sand pit on an outdoor track in Raleigh during a long jump competition. Similar situations arise in sand traps on golf courses and in sandboxes and sand-covered play areas because the loose sand makes for ideal excavation for nesting sites. We’ve also seen the wasps take advantage of piles of fill soil as well. 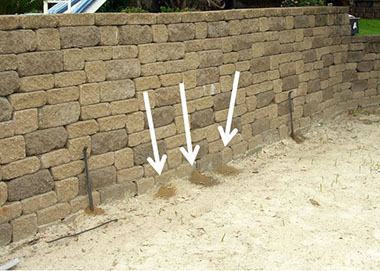 Although cicada killers usually nest in soil, they will also take advantage of pre-made nesting cavities. I took this picture of wasps excavating the soil from between blocks in a retaining wall at a residence in Swansboro, NC.

We typically expect cicada killers to start around mid-summer; however, early-season weather (both temperature and rainfall) can affect the activity of many insects. The retaining wall picture was taken June 23, 2011.

The concern about cicada killers is caused by the frenzy of activity that we see first with swarms of males flying over open areas and often jostling with each other as they await the female wasps to emerge. These large mating aggregations, called “leks”, are both interesting and frightening to many people who compare them to swarms of bees or hornets emerging from a nest that’s been disturbed. In spite of their imposing size and seemingly aggressive behavior, male cicada killers lack stingers and are harmless. This is followed by the female wasps scouring sites to begin digging their nests. Although female wasps have stingers (which they use to immobilize their prey), they are not aggressive towards people (although they may fly in your direction as the search for prey. Stings are rare and usually the result of accidental encounters.

Surface sprays of insecticides rarely kill many wasps or deter the digging activity. Squirting insecticide into each nest opening will kill wasps. Insecticidal dusts (such as Sevin® Dust) will also work but should not be used in areas where children and pets might come into contact with the chemical. Nest treatments are labor intensive because the nests are dug over weeks, not days, and they do not provide long-term control because other wasps in adjoining untreated areas will simply move at some point. In managed turf, keeping grass areas wet may send the females elsewhere. If wasps are investigating or nests in sand, raking those areas may help. With sandboxes and small sand-cover play areas, two simple solutions are: a) cover them with a plastic tarp during periods of wasp activity, and b) find another activity to occupy the kids!

Details of cicada killer biology and behavior can be found here:

This factsheet summarizes the characteristics of the cicada killer wasp and addresses how to control it as an insect in turf.