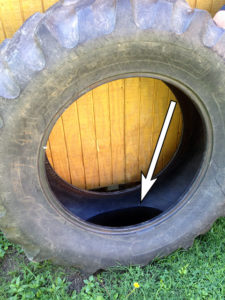 A water-filled tire leaning against a storage shed quickly becomes a mosquito habitat.

Many of you may have seen the news about the New Hanover County Public Health office reported that a mosquito collected in the sampling program tested positive for West Nile virus. What this simply means is that there are likely some WNV-infected mosquitoes present in the area, but there’s no real way to estimate how widespread those mosquitoes might be. From 2012-2017, there were 25 reported cases of West Nile virus in North Carolina and seven reported deaths. In 2018, there were 10 reported WNV cases and two deaths. The take-home message here remains the same – that personal protection, such as wearing an insect repellent when spending times outdoors, is the extremely important particularly when air temperatures are high and we’re inclined to wear short-sleeved shirts and shorts. Part of that time outdoors needs to be spent on removing those sources of standing/stagnating water that too often serve as mosquito breeding grounds. This won’t stop the problem entirely, but it’s a good start.

Mosquito Control Around Homes and in Communities