The German cockroach: biology and control

The German cockroach is a highly pestiferous insect that produces asthma-inducing allergens, and is closely associated with areas of human habitation. As such, the German cockroach is transported through human activities, such as food and equipment dispersal. In connected apartments and buildings, German cockroaches can also move between units, making control difficult in heavy infestations. It has previously been shown that the bacterial flora transmitted by German cockroaches presents a serious epidemiological problem for human health and well-being, especially to those living in low-income housing. Because German cockroaches are able to vector antibiotic-resistant bacteria, its presence must be controlled to reduce the threat of bacterial contamination in hospitals and swine farms. 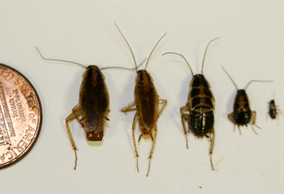 The German cockroach is a small, noctural, dime/penny sized, fast moving cockroach that can quickly escape into cracks and crevices in the wall. Adults are elongated, light carmel-colored brown, with two longitudinal black stripes running along the pronotum. Adult females may be seen carrying an egg case (shown to the right). Nymphs are darker brown/black colored, smaller, and oval shaped.

Care must be taken to avoid regular spray schedules to reduce the likelihood of insecticide resistance. Rather, an IPM, or integrated pest management approach can be used effectively for German cockroach control. IPM utilizes inspection, directed (rather than broad) insecticide treatments, and sanitation to reduce the use of chemical sprays which may pose a danger to children and pets. Use both baits and traps as directed on the product label.

To inspect for the presence of German cockroaches, one can use pheromone sticky traps (commonly found in hardware/supermarket stores) to attract and trap German cockroaches. However, the use of these traps requires vigilant inspection over time (traps are only as useful as the person that monitors them). For an easy-to-make homemade trap for a possible German cockroach infestation, take a baby food jar and coat the inside-upper walls with vasoline. Put a small amount of beer and bread inside the baby food jar, and place jar along the wall underneath the kitchen sink. The smell of fermentation and yeast from this attractive mixture will lure nearby cockroaches, and when the cockroach falls into the jar it won’t be able to run up the vasoline!

Baits (such as those in tradenames Avert, Combat, Max Force, etc.) have been shown to have a high degree of effectiveness against populations of German cockroaches. This has the advantage over regular baseboard spray regimes because less active ingredient is being broadcasted over a large area (which children and pets could come into contact with). Instead, the active ingredient is directed at areas that have the highest probability of intercepting German cockroaches. With baits, place several widely spaced nickel/dime-sized spots of bait on the floor against the wall in the kitchen and bathroom where German cockroaches are spotted (under the sink, next to the dishwasher, behind the oven). Remember, these cockroaches need food and water, so target potential sources of food and water!

Note: Baits may require a couple of weeks to significantly reduce cockroach population numbers, so be patient!

For effective control, cockroaches must prefer to eat the bait product over surrounding, non-toxic foods. That means cleaning the dishes in the sink, removing trash in a timely fashion, properly storing food, cleaning spills quickly, and identifying potential water sources (such as leaky pipes). Cleaning and sanitation has been shown to be effective at reducting German cockroach population numbers, and reducing cockroach allergen levels. Reduce clutter to reduce possible cockroach harborages.

Nip problems in the bud by making sure that food containers are securely sealed, cracks and crevices are sealed, and leaky pipes are identified.