What Are the Patterns of Why Honey Bee Colonies Are Dying in the US?

Find this article at:
go.ncsu.edu/readext?276763
— Written By David Tarpy

Answer: Another year, another survey, and the findings remain less than encouraging.

It seems counter-intuitive that we don’t have a clear picture about our managed honey bee population like other livestock. The USDA has a very good idea how many cattle and pigs farmers have at any given time. But bees? The numbers are sketchy at best. Why? There are several explanations, depending on how cynical you wish to be. On the extreme end, honey bees aren’t considered livestock in the same way that cows and pigs are (and probably for good reason), and therefore they don’t receive the funding and attention that other agricultural animals do (which isn’t a good reason). To point the fingers at ourselves, the statistical arm of the USDA (the National Agricultural Statistics Service, or NASS) annually sends out surveys to beekeepers to report, among other things, how many hives they have. It is no secret that many beekeepers chose not to complete these forms for various reasons. Nonetheless, the sample is biased (part-time beekeepers with 5 or fewer hives aren’t included) and most likely incomplete (many states, including NC, do not require registration with their state Departments of Agriculture). No wonder the federal government thinks that there are only 15,000 colonies in the state! One final reason is that a honey bee colony is nothing like a cow or a pig; the life cycle is much shorter, and what defines one individual from another is much less defined (you can’t split and re-unite a cow several times over the course of a single season!). So, by its very nature, the honey bee population is much more ephemeral than other livestock, and therefore more difficult to capture numerically.

The downside to not reporting data is that we can’t easily detect large-scale trends. It could be firmly argued that CCD and other bee plights might have come to our attention much earlier if our statistics were better. But are there alternatives or ways around the inherent difficulties outlined above? Luckily, the answer is yes. Rather than conducting top-down surveys, which relies on incomplete information and beekeepers self-reporting, one can conduct a bottom-up survey through a systematic sampling of beekeepers directly. Now some have argued that getting information from only a handful of beekeepers is misleading since it isn’t fully representative. However, given open-market dynamics, you need surprisingly few samples to gain a very accurate global perspective. Take gasoline prices, for example. One way to find out the price of a gallon of gas is to mail out surveys to oil executives and stock traders, hoping that they would respond. But another, perhaps easier way is to simply drive around to various gas stations in your area and find out direct. The prices vary surprisingly little, because they are all competing in an open market. This stabilization effect helps make sampling surveys to be quite effective and efficient at gaining a large-scale perspective.

For several years now, the Bee Informed Partnership has been doing such bottom-up surveys on the managed honey bee population. The latest such survey, published in a special issue of the Journal of Apicultural Research, highlights the colony losses in the United States over last winter (that is, 2012-2013). The findings are similar to those from previous, similar surveys, illustrating several important trends. First, the vast majority of beekeepers are considered backyard beekeepers (95.3% of the respondents), whereas the vast majority of the honey bee colonies (88.2%) are managed by the commercial beekeepers. This has long been known about the apiculture industry, but its importance cannot be understated when interpreting the skews in these survey data. Second, small beekeeping operations (1-50 hives) had higher winter losses (43%) than intermediate-sized operations (51-500 hives) at 37% and large beekeeping operations (500+ hives) at 30%. Interestingly, this survey is the first to distinguish winter losses from summer losses. What those results show is the reverse trend, where small-scale beekeeper had significantly lower losses during the summer than commercial beekeepers. In the end, the average annual losses were not altogether different between the three groups (Figure 1). Third, the top reasons for total mortality were weak colonies going into the fall (56% risk of mortality), starvation (55% risk of mortality), queen failure (51% risk of mortality), and varroa mite infestation (57% risk of mortality). 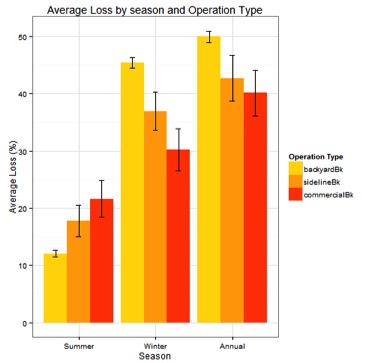 Overall, about 30% of the colonies in the US died last winter, which is up 9% from the previous years. Your average beekeeper, however, lost 45% of their hives (again, because most beekeepers have smaller operations, which lost bees at a higher rate). While the top reasons for colony losses are fairly consistent, they tend to vary year to year. This serves to underscore the complexity of beekeeping and the fact there are many, many factors that beekeepers need to consider in order to maintain a healthy population.