Find this article at:
go.ncsu.edu/readext?417199
— Written By Hannah Burrack

Our laboratory is beginning a project to determine the baseline susceptibility of tobacco-feeding tobacco budworm (Heliothis virescens) populations throughout the southeast to chlorantraniliprole, the active ingredient in the insecticides Coragen, Prevathon, Besiege, Voliam Xpress, Voliam Flexi, and Altacor. To do this, we will be collecting larvae from tobacco fields and screening them in laboratory. The long term goals of this project are to better understand the risk of tobacco budworm resistance to this material and to enable resistance monitoring.

We are eager to get started and had just started looking for field populations of budworms when the agent in Wilson County alerted us to an active infestation in a recently planted tobacco field. We set out and collected about 60 larvae from the two week old plants on May 27th.

Two species of caterpillars commonly feed on tobacco buds, tobacco budworms and corn earworms (also known as cotton bollworms, Helicoverpa zea). Tobacco budworms are typically more common than corn earworms, so we expected that most of the larvae would be this species. Larvae are difficult to distinguish to species when alive, but adults are very easy to tell apart. We waited until they pupated, and then placed the pupae in individual vials until they emerged.

This week, the last of our moths are emerging, and much to our surprise, all of the emerging adults were corn earworms! Earworms complete 3 to 4 generations in the southeast, and the first generation usually feeds on weeds or tobacco. Therefore, it is not unheard of for them to present early in the season, but it was striking that none of larvae were collected were budworms. 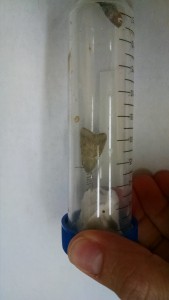 This is not a tobacco budworm. Photo: Hannah Burrack

Cooperators have collected similar samples in tobacco fields in Georgia for us, and many of those larvae are behaving more like earworms than budworms (earworms tend to be a bit more aggressive). We are curious to see what the population distribution looks like at these sites. While earworm and budworms would be managed using similar methods in tobacco, they do differ in important ways. For example, corn earworms are generally more susceptible to pyrethroids than tobacco budworms. We will post updates on this project as it develops.