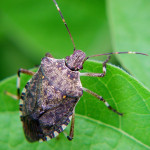 The brown marmorated stink bug (BMSB, Halyomorpha halys) is an invasive pest that was accidentally introduced from Asia into Pennsylvania in the 1990s. Its first detection in North Carolina was in Forsyth County in 2009, and it has since spread rapidly throughout the piedmont and mountain regions of the state. The coastal plain has had fewer occurrences during this period, although the insect has appeared in isolated locations. As of January 2023, it had been confirmed in 78 of NC’s 100 counties.

Our research focuses primarily on controlling BMSB in agriculture. For information on dealing with BMSB around the house, visit our FAQ page.

Although BMSB can be a destructive pest to a wide variety of crops, it usually establishes itself first in urban landscapes, roadside vegetation, and structures that provide attractive overwintering sites. This has been the case in North Carolina, with most early reports coming from property owners in urban areas between Raleigh and Asheville (the I-40 corridor) who have experienced BMSB “invasions” in late summer. Sightings in home gardens and on commercial farms increased from extremely isolated reports in 2010 to widespread occurrences by 2015. In some locations, populations have become large enough that frequent pesticide applications are necessary to prevent extensive crop loss. 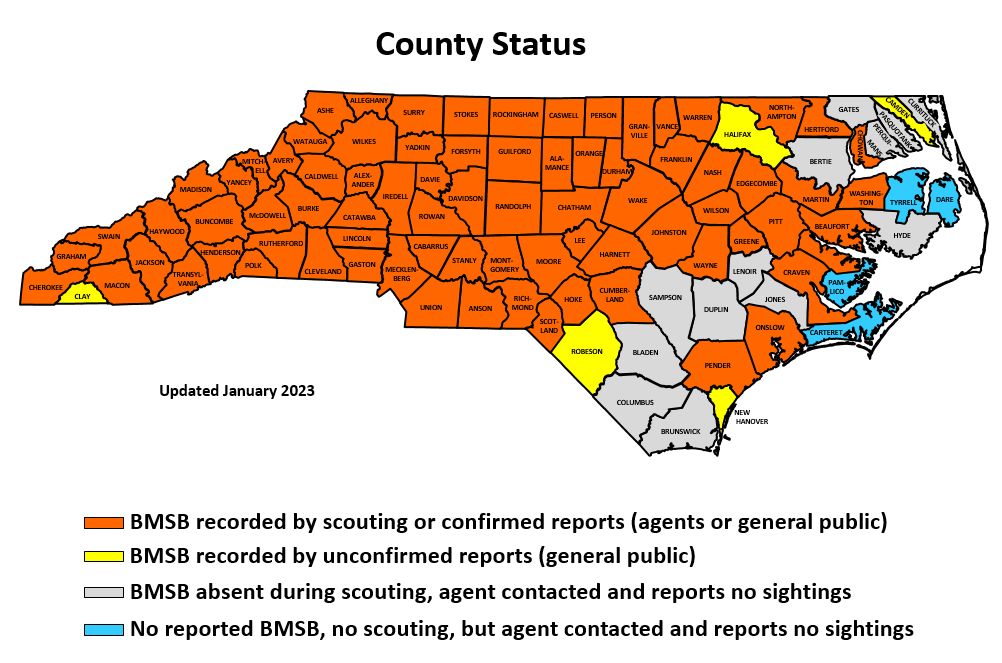 In September and October, brown marmorated stink bug adults move into structures, standing dead trees, and other sheltered places to overwinter. They may move around on warm days, but generally they are in a state of reduced activity. They do not feed or lay eggs. Except for their annoying presence, they do not harm people or pets. They usually do not damage property, although in large numbers they have been known to clog heat pumps and power equipment.

In April and May, overwintered adults leave shelter and BMSB are seldom found indoors again until late summer. They move into nearby woods (and sometimes agricultural fields) where they mate and lay eggs on suitable host plants. By June or July eggs hatch and BMSB pass through five nymphal stages (“instars”) before becoming adults. Many of these 1st-generation BMSB invade farms and gardens as fruit and vegetables mature. Later in the season they may move into soybeans and other field crops. When conditions are ideal (long periods of warm temperatures with favorable hosts present), a second generation of adults may be produced.

When days become shorter in early August, adult BMSB stop laying eggs. In September and early October, adults begin looking for overwintering sites, and by late October or November most individuals have settled back into buildings and other sheltered places. The months of September and October, when adults are aggregating in large numbers, is usually when invasions to new areas are first observed. 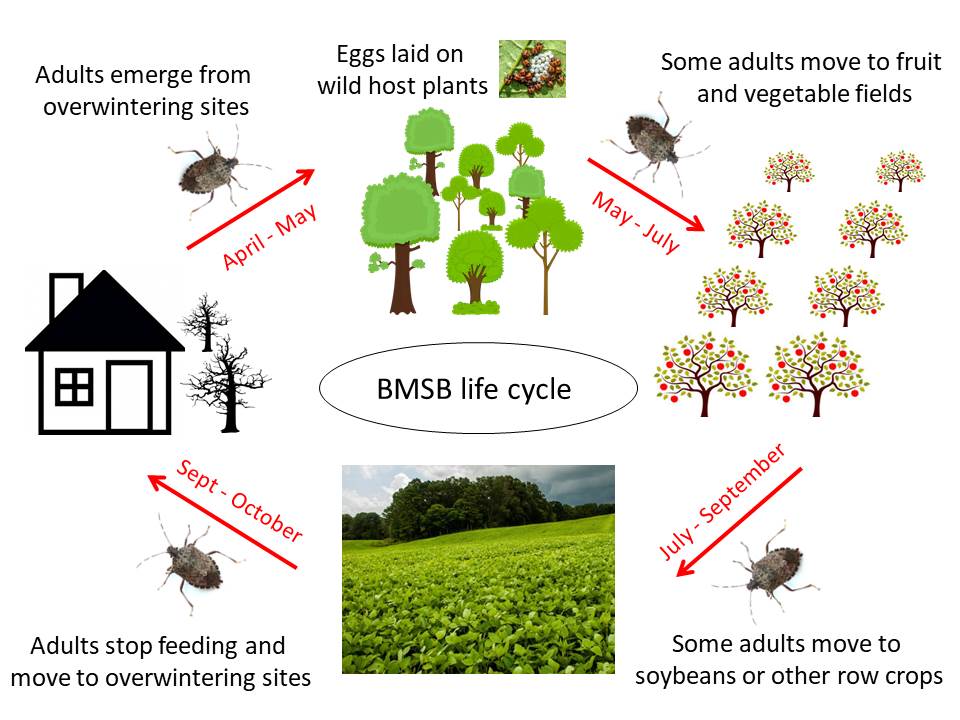 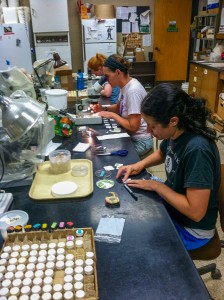 Since 2011, NC State University has been part of a collaboration of over 50 scientists working on the biology and management of BMSB in the United States. During that time we have introduced emergency measures to minimize crop damage, developed monitoring traps and attractants, gained a clearer understanding of the BMSB life cycle, and identified many of the wild plants that BMSB use to complete their development. We are also identifying native and non-native predators and parasitoids of BMSB, which may hold the most promise for controlling the insect in the future.

Despite the short-term effectiveness of current control methods, they are not sustainable. Broad-spectrum pyrethroids and neonicotinoids have reduced the severity of BMSB damage in many crops, but they have also increased production costs and disrupted IPM programs, resulting in greater risk to non-target organisms and secondary pest outbreaks. In addition, some crops (such as ‘Granny Smith’ apples) continue to be heavily damaged by BMSB despite the use of aggressive insecticide programs.

The focus of BMSB research has therefore shifted toward finding management strategies that will be effective over the long term. Current projects in North Carolina include: 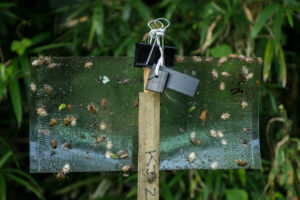 Developing BMSB population models. Sticky card traps have become standard as a means of monitoring BMSB populations for making pest management decisions. We are now working to develop correlations between the numbers of BMSB captured on sticky cards and damage inflicted in various crops. The end goal is a decision-risk system that uses BMSB trap counts in conjunction with degree-day accumulations to better forecast the need for and timing of insecticide applications. Such models could substantially reduce the number of sprays compared to current protocols. These systems will also be useful in implementing other management tools, such as releases of biological control agents. 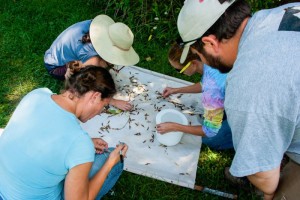 Studying BMSB phenology and host plant availability in different regions. To help predict specific locations and habitats where BMSB is most likely to establish, we are studying the effects that biotic and abiotic factors (such as climate, host plant suitability and distribution, and agricultural and landscape ecology) have on BMSB populations as measured by sticky trap captures. The fact that BMSB are highly aggregated in different ecoregions of North Carolina suggests that factors specific to those regions are important in regulating population size. In addition, our trap counts are added to a nationwide database used by landscape modelers at Washington State University to determine the likelihood and severity of future BMSB invasions in all regions of the United States. 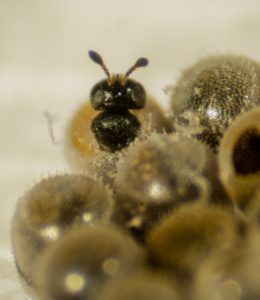 Identifying natural enemies and incorporating them into management programs. Biological control has the potential to suppress BMSB populations over large areas and in a wide variety of landscapes. In its native Asia, BMSB is not a major pest, partly because of tiny parasitic wasps (parasitoids) that destroy large numbers of BMSB eggs. To monitor biological control of BMSB in NC we deploy yellow sticky traps as well as “sentinel” BMSB egg masses on a variety of host trees and crops. Parasitoids that emerge from sentinel eggs are identified to species. For years, only native species of parasitoids were detected in North Carolina, and (along with native predators such as katydids, jumping spiders, earwigs, and lady beetles) they have had only a modest effect on BMSB populations. 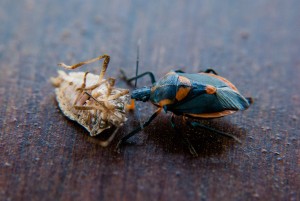 However, in 2021 our lab captured Trissolcus japonicus at two locations in North Carolina. This stingerless, flea-sized wasp (<1-2mm long) coevolved with BMSB in Asia and is much more effective at controlling BMSB than native parasitoids. T. japonicus was first found in the US in 2014 after presumably arriving with BMSB. To date, it has been found in the wild in thirteen states and it is being studied in quarantine at USDA facilities. By law, T. japonicus may be released only in states where it has been found naturally. Since discovering T. japonicus in NC, we hope to begin researching the best ways to harness its potential as a biological control agent.

We also continue to maintain lab colonies of native hymenopteran parasitoids to research their ecology and biology, and we perform bioassays on the lethal and sub-lethal effects of organic pesticides on native parasitoids. Future research will focus on understanding which biological enemies are most effective, where they occur, and how management practices can increase their effectiveness in North Carolina agricultural systems. 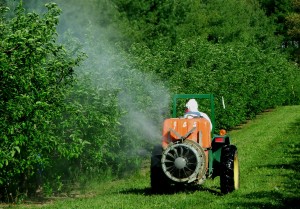 Refining the use of new pesticides to control BMSB. Insecticides will remain a critical component of BMSB management for the foreseeable future, and pyrethroids and neonicotinoids are currently the most effective materials available. However, frequent use of these broad-spectrum chemicals is not compatible with IPM programs, and it may eventually cause the development of resistance in BMSB populations. As new materials with new modes of action are developed, they will be lab- and field-tested for both efficacy against BMSB and minimal impact on natural enemies.

Click the FAQ page for the most common concerns.