Find this article at:
go.ncsu.edu/readext?416292
— Written By Lauren Diepenbrock

A recently study from our lab explored how spotted wing drosophila (SWD) use the microhabitat within blackberry canes, which can be problematic for the management of this pest. This research was based on field observations of adult SWD lingering in the interior portions of an under-pruned commercial blackberry planting. SWD are generally not active during the daylight hours, preferring the dawn and dusk periods for the majority of their activity (Ferguson et al. 2015), so this was an unexpected observation.

Based on this observation, we sampled ripe, marketable berries from throughout the cane canopy (Fig 1; samples taken in “canopy”, “inner”, “mid-edge”, and “lower edge”) of 4 commercial blackberry plantings (2 in 2014, 2 in 2015) and at 2 research stations (Piedmont and Sandhills). 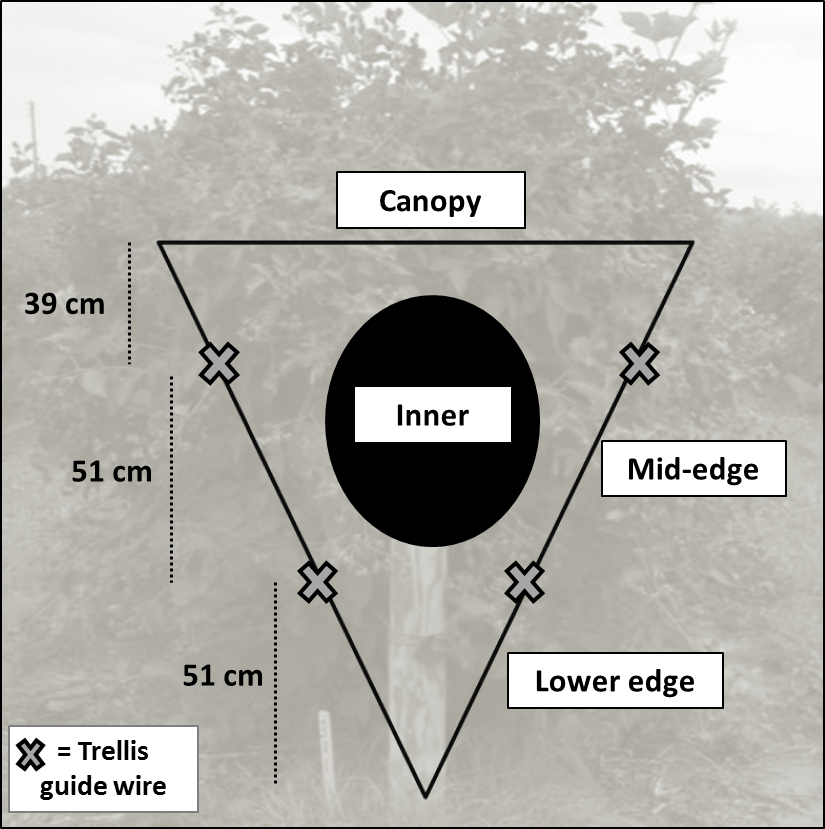 In 3 out of 4 commercial plantings and at both research stations, we found that infestation was highest within the inner portion of the canes. We also found that once infestation occurred in this inner area, it was persistent in the field for the remainder of the season. Overall rates of infestation were lower at our fourth commercial location (2015). This grower was aware of our preliminary research from 2014 and ensured that plantings were highly pruned to enable air flow and light penetration (potentially reducing areas of higher humidity within the canes) and increase spray penetration for insecticide application. Researchers were also invited to talk with the pickers about SWD and how they can help by removing all fruit when picking, even the unmarketable fruit.

Because we expected that this difference in infestation might be due to a difference in abiotic conditions (temperature and relative humidity), we did a preliminary exploration of these factors using weather stations at one grower field in 2014 and at one field station in 2015. Our data show that while there was no difference in temperature between the interior portion of the cane and the edge of the growing field, there was a difference in relative humidity, with the interior portions of the canes being more humid than the edge of the field. SWD has been shown to have a greater rate of survival and higher reproductive capacity with higher levels of humidity (Tochen et al. 2015), so a higher relative humidity within blackberry canes may create an ideal habitat for SWD.

Can blackberry canes be managed for better SWD control?

Evaluation of cultural management practices for spotted wing drosophila (SWD) control is one of the goals of a recently funded USDA Organic Research and Extension Initiative (OREI; http://eorganic.info/spottedwingorganic). This grant is headed by Dr. Ash Sial (U. of Georgia), with collaborating researchers across the United States.

As part of this research team, we are evaluating blackberry cane density management at our Piedmont Research Station. During the winter floricane pruning, we created treatments with 3 different densities of canes and trimmed back vertical growth to approximately 4 feet (approx. 1.2 m). Primocanes have been permitted to grow in naturally during the spring and summer and are tipped periodically to maintain the height of vegetation. 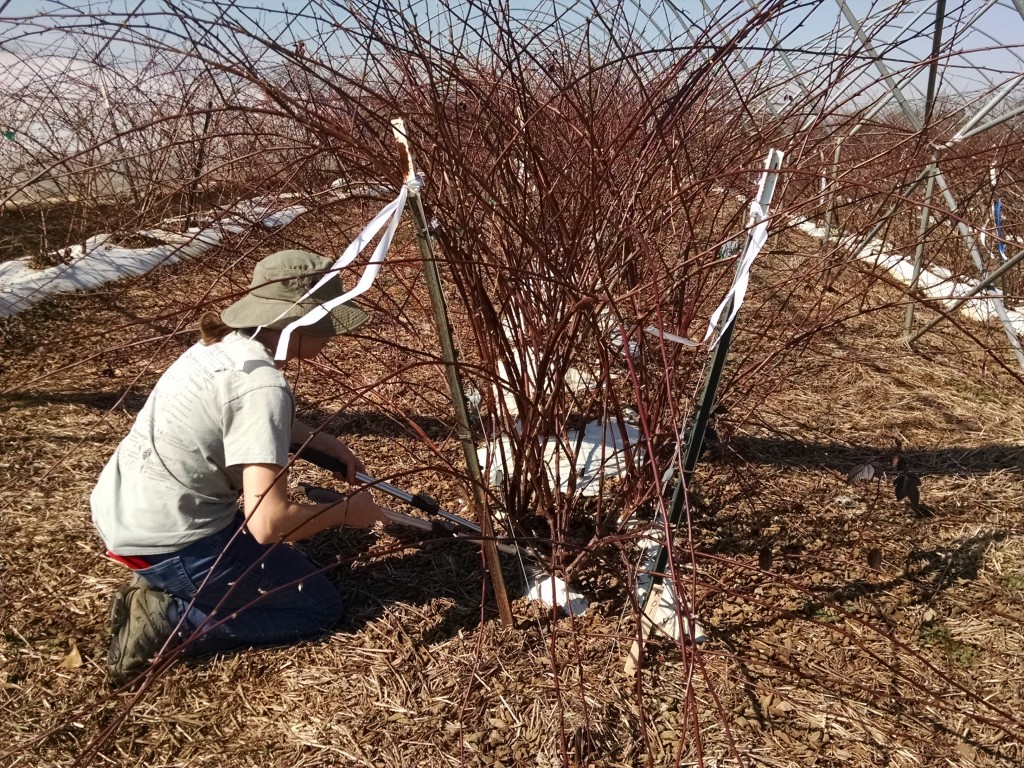 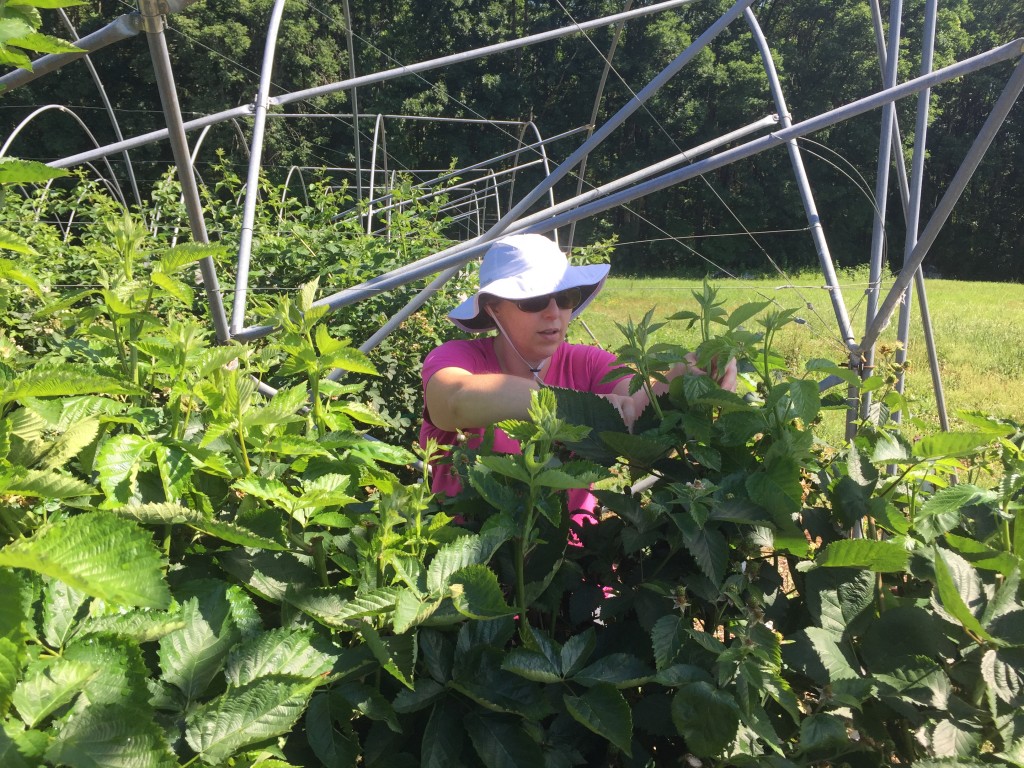 We will begin our blackberry harvest this coming week, picking ‘Ouachita’ now and also ‘Von’ in a few weeks. During the harvest, we will be looking at infestation, yield, and berry quality within each pruning regime. While our goal is to reduce infestation using pruning practices, we also have to be sure that we do not negatively impact yield or berry quality to ensure that these are viable management options for growers.