Find this article at:
go.ncsu.edu/readext?424581
— Written By Michael Waldvogel and last updated by Hannah Burrack 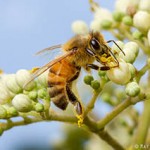 Barely a day goes by when Zika virus is not in the news headlines. As of August 31st 2016, the CDC has reported 2,717 confirmed case of Zika virus in the U.S. New York was #1 with 625 cases (23% of the total) but these were all travel-related (not acquired in the U.S.). Florida ranked #2 with 507 travel-related cases (19% of the total) and has the distinction of being the only state with locally acquired mosquito-transmitted cases of Zika virus (30 cases). North Carolina remained at #13 with 48 travel-related cases, where there has been zero cases of locally-transmitted Zika virus. To put this in perspective, Puerto Rico has reported 13,791 locally acquired cases of the disease.

Most of you have probably read about the recent aerial spraying for mosquitoes in South Carolina that resulted in death of reportedly 3 million bees in a commercial bee yard (see article).

This has led to a lot of people asking about whether this could happen in North Carolina, and the tragic incident serves as a learning experience about the importance of communication.

North Carolina has not used aerial spraying for mosquitoes in years (although that does not mean that individual municipalities or even private citizens have not done so). State-organized aerial spraying was done during true public health emergencies (typically after hurricanes). Even at that time, the standard practice was that before any aerial spraying took place, efforts were made to:

Obviously, this system is not perfect because it relies on communication and cooperation among the state agencies planning the spraying and the beekeepers, organic crop producers, other groups, and the public in general. Key to this dialog is knowing the real-time location of beehives and apiaries, and the NC Department of Agriculture & Consumer Services (NCDA&CS) Apiary Inspection Service has long had a voluntary apiary registration program for exactly this reason (it should be noted that many other states have mandatory registration for beekeepers). Unfortunately, despite having the largest number of beekeepers in the nation, only a vanishingly small number of beekeepers have traditionally utilized this service. It appears that SC also has such a program, but there was (reportedly) some break in their line of communication.

As is all too common when the media is involved, there are some seeming contradictions in the facts presented. For example, CNN’s web summary of the incident reported that the county sprayed for Zika after “four local residents were diagnosed with the virus.” This would lead you to conclude that the situation was similar to what we see in South Florida. However, if you read the Washington Post version, those cases were simply local residents confirmed with the virus which they acquired as a result of travel to known Zika-infected areas outside the U.S.

The CDC presents guidelines for states and municipalities that focus on first confirming local transmission by mosquitoes before extensive chemical applications are done, and they recommend surveying all properties within at least 150m of a confirmed local Zika case. Here in NC, we follow “Best Mosquito Management Practices”:  first we survey to determine where we have mosquitoes and breeding sites, then we determine the best methods to address those sites. The emphasis remains on all of the non-chemical measures (what we call “source reduction”) that all citizens need to take to reduce mosquito populations around their home and community. Much of this information can be found on this NCSU blog.

Some people may question the idea of waiting for the disease to show up in our state, but we need to look at it as the sensible approach of IPM to reduce the risk of Zika virus spreading by mosquitoes. The initial emphasis has been for ground-based spraying within about 150 meters of ‘confirmed’ mosquito-transmitted cases (not simply someone who got the disease by getting bitten by an infected mosquito while traveling). This distance is based on the typical flight ranges of the mosquitoes.

Another critical detail—one not well presented in the CNN article and which is rarely addressed—was the common (and perhaps logical) suggestion that spraying is done at night when bees are no longer foraging. It is important to understand that the so-called “Zika mosquito” (Aedes aegypti), as well as the more common Asian tiger mosquito, are day-flying mosquitoes. Aerial spraying for mosquitoes, along with the more common truck-mounted ULV spraying, target the mosquitoes when they are actively flying and they literally run into the insecticide particles. The spraying seen in Miami, where the workers are going into residents’ yards, focuses on treating foliage (where the mosquitoes are resting) and more importantly targeting the breeding sites for the larvae—such as tires, tree holes, other man-made objects, as well as storm sewers and catch basins. Aerial spraying has been implemented to help reduce adult populations more quickly.

Various state agencies, along with mosquito experts at NCSU (Dr. Michael Reiskind), East Carolina University (Dr. Stephanie Richards), and Western Carolina University (Dr. Brian Byrd), have been working on plans to address any local Zika virus outbreak. There are currently no immediate plans to initiate spray programs on a state-wide scale. That said, there are many individuals, private citizens, who are paying commercial companies to treat their property. It is these ongoing treatments that can have enormous impact on backyard beekeepers, native bee populations, people with organic gardens, home-based childcare centers, and other situations.

Once again, communication is key, and we all need to do our part. This begins by educating ourselves about all aspects of this important issue, and requires that we notify our neighbors and public officials about apiaries and spraying.

For questions about managed honey bees and beekeeping, contact: