What’s under (or on) your Christmas tree?

Find this article at:
go.ncsu.edu/readext?501872
— Written By Michael Waldvogel

We’ve had a few calls and samples from people seeing small dark-colored “bugs” on or under their Christmas tree. There have been a few instances where ticks were passing the winter on the twigs or trunk, but for the most part, the problem is typically with what we call “Cinara” aphids, also called “Giant conifer aphids”. Jill Sidebottom at the MRHEC prepared a nice summary about this aphid which you find by clicking  https://christmastrees.ces.ncsu.edu/christmastrees-cinara-aphids-on-christmas-trees-in-north-carolina/ 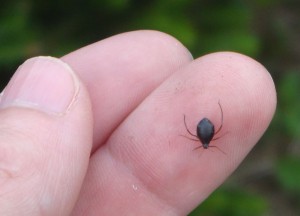 Closeup view of a Cinara aphid

Here’s a relatively short explanation and some advice that you can pass on to callers or last minute emails. The aphids get their name because they feed on.. you guessed it…  conifers.. and they’re fairly big as aphids go. They’re fairly common on Christmas trees. In these situations, the aphids had peacefully nestled down on the tree for a long winter’s nap when there arose such a clatter – that being the sound of chain-saw cutting down their tree which was then shipped off to a parking lot in a strip mall somewhere. You then buy this magnificent fir and put it up in your house and the warmth of the nearby fireplace (or kerosene heater) rouses the aphids who start wandering around and drop off onto gifts and the tiny Christmas village you put together under your tree each year. The aphids are strictly a nuisance particularly when you squish them and they stain the paper on your child’s gift for which you had spent an hour carefully wrapping and then tying a bow. You can easily fix this problem next year by skipping the present and just give your kid an Amazon gift card which is what they really wanted in the first place.

So, what to tell callers. First.. If they’re prepared to drag the tree outdoors in disgust, that’s there choice but it’s a waste of a fine Fraser fir plus you probably bounced a bunch of the aphids off onto the carpet in the process of dragging it out through the door. If a caller mentions that they have a can of “Hot Shot” insect spray in their kitchen cabinet, tell them that’s nice but they should leave it there. Don’t spray the tree with a typical insecticide. The reason? simple – First, if you spray it while the tree is lit, you might accidentally set it on fire with the aerosol insecticide. Although that does get rid of the aphids, the ensuing conflagration  likely incinerates the tree and possibly the gifts and tiny village under the tree (or worse, possibly your house). Second reason not to use an insecticde – inquisitive little hands. Children like to touch the tree (and then stick their hands in their mouths) and we don’t need that to include touching needles or decorations that are covered with pesticide residue. Third – pets. Those of you who have cats know what I mean. The felines like to chew on needles and many of you have likely also experienced the joy of seeing needles and pieces of tinsel embedded in the cat poop as you clean out the litter box.

What can they use? – Insecticidal soap. It’s readily available in hardware stores (“Safer” is one common brand). You can pick it up when you’re out there at the last minute because you forgot a gift for someone. Some people will go online and find home-made recipes for insecticidal soap but we’re not legally in a position to recommend that. Insecticidal soap is very effect as a *contact* insecticide and does not pose a toxicity issue for people, kids or pets. It won’t leave a residual to kill aphids later but if you squirt the ones you see now, it will likely keep the problem to a minimum.

Merry Christmas to all and to all a good and aphid-free night….