Find this article at:
go.ncsu.edu/readext?517620
— Written By Jim Walgenbach and last updated by Stephen Schoof

The green tip to petal fall period is an important time for preventive management of several key insect and mite pests that can cause problems down the road. The key pests to be targeted at this time include San Jose scale, European red mite, rosy apple aphid, plant bugs, plum curculio, and oriental fruit moth. An oil application at green tip and insecticide application at petal fall are considered the two most important sprays. A spray at tight cluster to pink is an optional spray that targets primarily rosy apple aphid, which can also be controlled at petal fall. The choice of insecticides to apply will vary depending on the timing of the spray and what was or will be sprayed at a later date.

Oil:  This is the traditional time for a 2% oil application, which targets overwintering eggs of the European red mite (ERM), immature stages of the San Jose scale (SJS), and eggs of the rosy apple aphid. Many consider this to be one of the most important sprays in maintaining long-term health of the tree. Oil acts by essentially suffocating eggs and scales by preventing oxygen uptake and interrupting respiration. Good cover of the spray is obviously important, because the pests are immobile at this time and can be under cracks and crevices of bark. Increasing spray volume of water applied by 1.5 to 2X over that applied in cover sprays is recommended. By suppressing early season populations with oil, it will take the pest longer to buildup in numbers and allow for natural enemies to provide more effective biological control. Despite the use of oil in tree fruit production for over 100 years, there has been no incidence of resistance in a pest population.

Insecticide: An insecticide may also be applied with oil to extend or enhance the level of control of certain pests. Historically the most common insecticide applied with oil has been Lorsban (chlorpyrifos), which has long residual activity on the bark and at one time controlled several key pests, including ERM, rosy apple aphid and San Jose scale. Because of extensive use of this product since the late 1960s, ERM and rosy apple aphid populations have developed tolerance in many orchards. While oil + Lorsban has provided effective season-long control of SJS for many years, the incidence of SJS-infested fruit in Lorsban-treated orchards has increased in recent years.

An alternative to Lorsban at this stage is either Esteem, Centaur or Diazinon 50WP. There has been some concern expressed about the compatibility of Centaur mixing with oil, so that may be an issue with that product at this time. However, probably a more effective timing of any of these products (i.e., Esteem, Centaur, or Diazinon) for San Jose scale is at petal fall or first cover, which targets new emerged crawlers. Under this scenario, only oil would be applied at the green tip period.

The primary target with this spray is rosy apple aphid, because egg hatch is usually complete by the pink stage of ‘Delicious.’ Depending on the insecticide used, this spray can also help suppress tarnished plant bug populations, although most plant bugs will not be entering orchards until petal fall. There is evidence that maintaining a clean ground cover during bloom and petal fall may be more important than an insecticide in minimizing plant bug damage to apples and peaches.

This is a critical spray for several pests, and the choice of insecticide to use will depend on what, if any insecticide was sprayed before bloom. The most important pest to control at this time is the plum curculio, and petal fall is a critical time to control this pest. For those that have not deployed pheromones for mating disruption of oriental fruit moth (OFM), an insecticide for this insect should also be used. Finally, if an insecticide effective against San Jose scale or rosy apple aphid was not applied before bloom, a material effective against these pests should also be considered.

Based on the increasing incidence of San Jose scale problems in orchards where Lorsban was applied at green tip, an application of Esteem, Centaur, Diazinon 50W or Movento may be the best option for scale control. Control at this time is targeting crawlers, the first immature stage and the only one that is mobile, because the next life stage will begin feeding and secreting its waxing scale covering. The window of opportunity to control scales at this time extends from petal fall to first cover, because this coincides with the first emergence of the crawlers. This is illustrated in the figure below which shows the phenology of adult males (the only stage that flies) and crawlers at the MHCRS in Mills River. These population curves will be slightly earlier or later, depending on elevation relative to Mills River, but their relation to petal fall and first cover will not change. 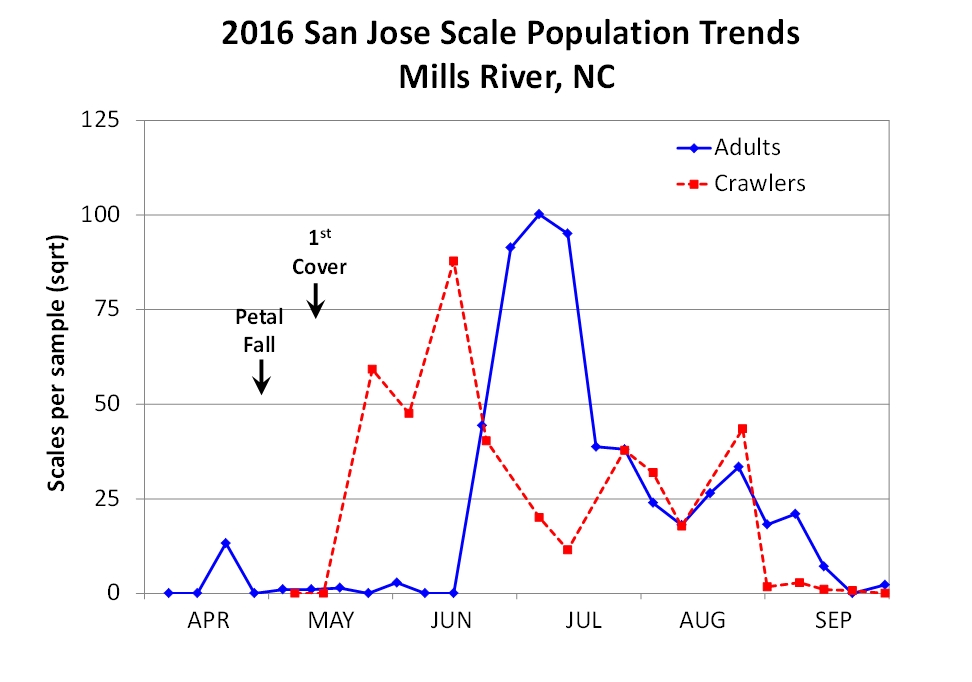