Find this article at:
go.ncsu.edu/readext?672674
— Written By David Tarpy

This global health crisis has certainly hit us all like a ton of bricks, and at the time of this writing (early April 2020) we are still amidst our “social distancing” and mandatory University and state-wide shutdown. Tragedies such as this remind us all of the important things in life, and while we love our honey bees, they are way down on the list of priorities, as family, friends, and loved ones take the only precedent with everything else a distance second. It is my fervent hope that everyone is—and will remain—healthy, happy, and safe.

I’m sure by now everyone has heard (probably more times than they care for) about how COVID-19 came to be. It’s a coronavirus of the virus family Coronaviridae (so named because of its crown-like protein coat), and it is not endemic to humans. [By the way, while honey bees have plenty of viruses, mostly in the families Iflaviridae (e.g., Deformed Wing Virus) and Dicistroviridae (e.g., Acute Bee Paralysis Virus), they don’t have any coronaviruses as far as we know]. What I haven’t heard in the media, however, is the term ‘host-shift,’ which is the biological phenomenon when a parasite or pathogen “jumps ship” from one host species to another. You see, most microbial disease agents (viruses, bacteria, fungi) have a difficult time counteracting the complex immune systems of their hosts, so both host and pathogen have to constantly re-adapt to develop protective measures and counter-measures of resistance, respectively. In doing so, over time most disease agents tend to specialize on a given host—at the cost of being able to infect other hosts. That’s what makes host-shifting so rare (at least compared to within-species spread), but this is exactly what happened with SARS-CoV-2 (the specific virus that causes the disease COVID-19). Horseshoe bats are the predominant mammalian reservoirs of SARS-CoV-2, but genetic sequencing suggests that an intermediate host (a pangolin, which is a scaly ant-eater-looking type of a creature in Asia) is how humans seem to have actually contracted it. Nonetheless, once the virus made this host-shift to humans, the ugly consequences have ensued.

There are three very famous host-shifts of honey bee parasites, and I outline them here in increasing order of importance and severity. In each case, the original host of each parasite was Apis cerana, the Eastern honey bee of Asia (compared to “our” Apis mellifera, the Western honey bee of Europe and Africa then subsequently disseminated worldwide by humans), and the co-mingling of the two species was facilitated by introducing A. mellifera to eastern Asia over 100 years ago (if not before) but particularly after the trans-Siberian railway was constructed. The first parasite that made a host-shift is Nosema cerana, which is a microsporidian that lives in a bee’s gut and one that you’ve likely heard of but have never seen. This new species has all but replaced the original Nosema species in Western honey bees, N. apis, which was mostly a problem during winter confinement. The tell-tale symptoms of this “old Nosema” was the bees got constipation and diarrhea at the same time (their hind guts would get bloated but they don’t defecate in the nest, so they fly outside and litter the hive face with little fecal droplets). N. ceranae, however, seems to infect bees all year long, doesn’t cause overt symptoms, and is pretty much found everywhere with varying degrees of disease (=Nosemosis). It is highly variable, though, both within and among colonies; you can have some individual bees with high levels while other nestmates have few to none. Similarly, while most colonies have low levels, others have a lot and a few have none. Nosemosis, therefore, is also very spotty and difficult to determine, so at present we still don’t really know how major a problem this disease might be for beekeepers.

The second parasite that made its host-shift from A. cerana is the varroa mite, Varroa destructor, and I know you’ve heard of this one since it’s the primary management concern for all beekeepers in North Carolina (and beyond). It actually shifted hosts to A. mellifera about 100 years ago in Asia (Figure 1), but it didn’t start to rapidly spread globally (except for Australia) until the 1960s, being 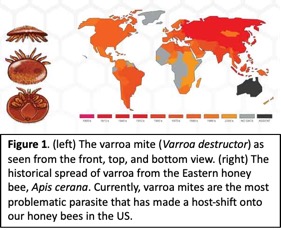 introduced to the US in 1987 and into North Carolina in 1990. Like other non-endemic parasites, our bees don’t have well-developed defenses to varroa, so their impact to NC beekeepers is tremendous. There are two types of honey bee colonies: those that have varroa mites, and those that will have varroa mites. Our new mantra in the NC State Apiculture Program is that while treating for varroa (with synthetic acaricides) may be optional, controlling for varroa (by whatever means) is not.

The third and final A. cerana parasite is, luckily, not here in the US or North Carolina, and we hope it stays that way. It is known as Tropilaelaps (pronounced tro-po-LAY-lapse), and there are several species but the two main ones that can parasitize our bees are T. clareae and T. mercedesae. While the original host is actually the giant honey bee, A. dorsata, the intermediate host that passed it along to A. mellifera is, again, A. cerana (not unlike the pangolin being the intermediate host between bats and humans for SARS-CoV-2). 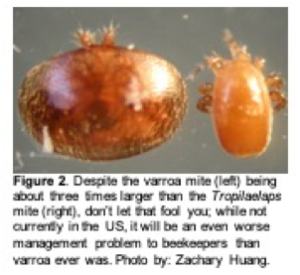 Regardless, its global distribution has been slowly increasing over the last 50 years, but fortunately it has remained mostly within the tropics up until now. While about a third the size of varroa mites (still ovate but skinny rather than oblong; Figure 2), they scurry about the nest very quickly, are hard to detect, and they make varroa infestation look like a decaf latte; Tropilaelaps is actually quite good at controlling varroa mites—because there’s no brood left for varroa to reproduce! This looming threat to beekeeping and the apiculture industry is a major reason why imports of live bees from other countries is strictly prohibited.

Now that our bees have these parasites, what can we do? And, what parallels can we draw from our experience with COVID-19?!

Honey bees have been dealing with exotic parasites for decades. Incorporating some of the same strategies that we’ve been practicing for COVID-19 into our beekeeping operation can actually help them cope better and deter their spread. Like in a honey bee colony, there is strength in numbers, so if we all do our part as a population of beekeepers, we can help make a difference for the greater good for the population of honey bees.