Find this article at:
go.ncsu.edu/readext?690547
— Written By Steven Frank

Nursery growers have been struggling with ambrosia beetles for decades. Now landscape trees are also getting attacked more frequently. In the southeast the granulate ambrosia beetle, Xylosandrus crassiusculus. In the Northeast and Midwest the predominate species is Xylosandrus germanus. These are tiny beetles that make tiny albeit lethal holes in trees. 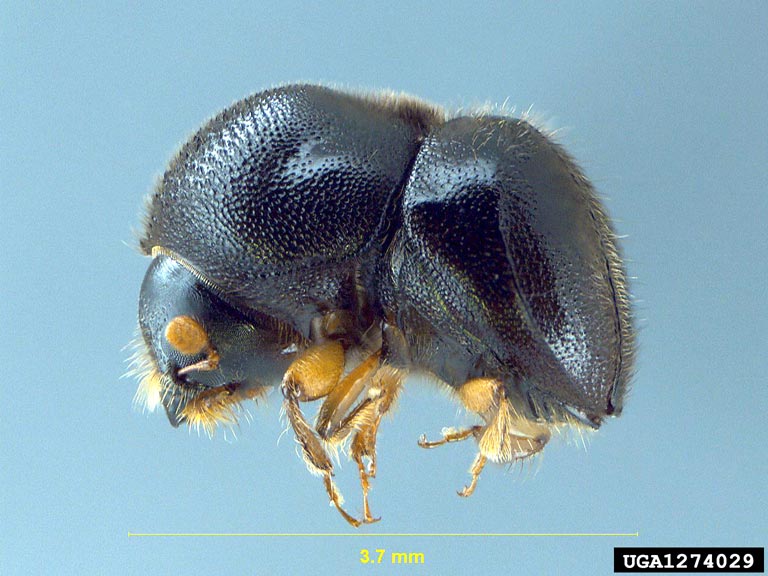 In the past several years a new species has been detected in several states including Florida, Tennessee, North Carolina, and just last month Virginia. This is the camphor shot borer, Cnestus (used to be Xylosandrus) mutilatus, and it is much bigger than the ambrosia beetles we are used to. You can find out all about it in a thorough publication from University of Tennessee.

The abundance of this pest has been increasing for the past 8 years or so. We used to catch one or two a year but now it is quite common. Amanda Taylor, Area Specialized Agent – Nursery and GreenhouseCamphor shot borer was recently caught in alcohol traps in the Hickory area but it is present throughout the state. Like  other ambrosia beetles, once the insect is in the tree, pesticides won’t work. A protective trunk spray of a pyrethroid, like bifenthrin, will reduce attacks of these and other ambrosia beetle. Repeat applications will be necessary.