How do I kill BMSB in my house?

Insecticide sprays are not always effective due to the mobile nature of the stink bugs, the constant influx of new stink bugs from outside, and the difficulty of treating populations without contaminating living areas. In addition, leaving a large number of dead BMSB inside attics, walls, or crawl spaces can attract more unwanted pests, such as carpet beetles. A better method is to drop captured individuals into a dish of soapy water to drown them, or to vacuum them and then freeze or discard the vacuum bag. Some homeowners with large infestations keep a hand-held, battery-powered vacuum just for BMSB removal. Admittedly, this can be time-consuming, but it is often the best option.

Try not to squash or agitate BMSB in the house, which only worsens the smell, or to live-release them outdoors, where they will eventually come back inside. 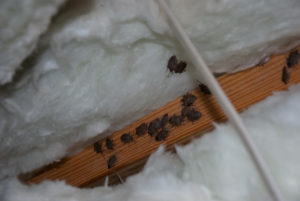 How do I keep BMSB out of my house to begin with?

In summer, after overwintering stink bugs have left the house but before they return in autumn, seal all potential entry points with weatherstripping, caulk, or foam sealant. Check for gaps around windows and doors, place screening over attic ventilation louvers, and make sure there are no gaps or cracks around faucets and piping. An excellent University of Maryland video demonstrates “Exclusion and Execution” techniques for BMSB invaders.

What can I do about stink bugs in my garden?

In the garden, BMSB usually attack tomatoes, peppers, okra, green beans, soybeans, corn, Swiss chard, peaches, apples, pears, plums and caneberries (i.e., most common crops). Damage consists of discoloration at the feeding site; rarely is plant vigor affected. Control is difficult due to the limited effectiveness of insecticides and a constant influx of BMSB from outside areas. Pyrethroid insecticides are most effective, so choose products that contain the active ingredient bifenthrin, cyfluthrin, or lambda-cyhalothrin. Options for organic growers are even more limited and require frequent sprays (possibly every couple of days under intense pressure) that target immature BMSB. Organic products that have shown activity include Azera (mixture of azadirachtin and pyrethrins) and Entrust (active ingredient spinosad).

Some researchers and organic growers have also tried “trap-cropping,” the practice of growing BMSB-preferred host plants (such as sunflowers) around the actual crop in hopes of diverting stink bugs away from important fruits and vegetables. Results have been mixed and more work is needed to make this method effective. Read more about BMSB in organic systems.

Will stink bugs hurt me, my children, my pets, or my property?

Stink bugs can devastate crops, but are otherwise only nuisance pests that do not bite, sting, carry disease, or chew structural materials. In areas with very high populations, they can get into small engines, heat pumps, and other equipment in numbers large enough to cause harm. Dogs, cats, and chickens have been seen eating stink bugs with no ill effects.

Why do BMSB stink?

All stink bugs are capable of emitting a foul-smelling chemical that they use as a defense mechanism when alarmed. The taste of the chemical also deters some birds and other animals from eating them. An undisturbed BMSB is not likely to stink, but the smell of many agitated stink bugs can be intolerable.

We have always had a few stink bugs around – why are there suddenly so many?

North Carolina has always had several species of native stink bugs, some of which appear quite similar to the brown marmorated stink bug. Native stink bug populations are kept in check by native insect enemies, but the BMSB is a recent, accidentally-introduced exotic pest that is not significantly controlled by native predators and parasitoids. Learn the differences between the true brown marmorated stink bug and its look-alikes.

What is the future of BMSB in North Carolina?

Since its first appearance in the state in 2009, BMSB has followed a trend already seen in states close to its original point of introduction: low numbers appeared in urban areas, then populations increased, spread to rural areas, and damaged agricultural crops within a few years. BMSB is now an ongoing challenge to gardeners and commercial growers throughout the mountains and piedmont of NC.

Populations are not increasing steadily everywhere, however. We have not seen high numbers in the coastal plain, despite the fact that many insects flourish in warmer temperatures. In the mountains and piedmont, some populations have increased while those at a few former “hot spots” have moderated or even declined. These trends have been observed in other states as well. Day length, the presence of wild and cultivated host plants, variations in weather, and the ease with which BMSB can migrate or be moved into an area all seem to affect the growth of populations. Whether recent local reductions are due to increased parasitoid activity, weather patterns, or other factors is still not clear.

Previous research by scientists around the US, including at NCSU, has helped commercial growers protect their crops from BMSB much more effectively than just a few years ago. Our focus now is to find controls that are cheaper, more efficient, and less disruptive to traditional IPM programs. Keep checking the BMSB home page for the latest information.