The terrapin scale, Mesolecanium nigrofasciatum (Pergande), is an occasional pest of tree fruits and shrubs throughout much of the southern and eastern United States. Like other scale insects, this species remains immobile (sessile) throughout most of its life cycle and secretes a rigid, hemispherical covering over its body. This protective cover(called a derm) is brown or reddish-brown and distinctively marked with radiating black bands resembling the shell of a turtle. The derm increases in size as the insect grows, eventually reaching a diameter of 3 to 4 mm (about 1/8 inch). 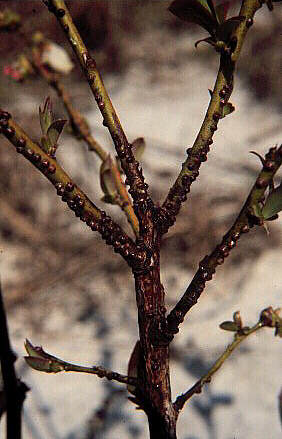 There is only one generation of the terrapin scale per year. Mated females overwinter on host plant stems (usually from the previous season’s growth), and bear live young over a period of 4 to 6 weeks in early summer. The young scale insects, known as crawlers, migrate to the leaves where they settle along the mid-rib and veins (usually on the underside) and begin to secrete a derm. Development continues on the leaves for six to eight weeks. In late summer, females migrate back to the stems and undergo a period of rapid growth and sexual development. Males remain on the leaves until they become sexually mature; then they migrate to the stems, mate with the females, and die within a few days. Females continue to feed and develop on the stems until forced into dormancy by cold weather.

Since scale insects feed by removing sap from a plant, they can reduce vigor, decrease yield, and even shorten the lifespan of infested bushes. Heavy infestations also produce large quantities of honeydew. This sugary waste product often coats the foliage, fostering growth of a sooty mold that blocks light and reduces the plant’s photosynthetic efficiency.

Numerous parasites and predators have been reported attacking the terrapin scale (Williams and Kosztarab 1972). The most abundant parasites are tiny chalcid wasps in the genera Aphycus and Coccophagus that attack female scales following the stemward migration. A ladybeetle, Hyperaspis binotata, is the most common predator. In some cases, these natural enemies exert significant restraint on the growth of scale populations, but hyperparasites are also abundant and the level of control tends to be variable from year to year.

Terrapin scale populations can be detected at any time during the year, but they are most conspicuous in late summer when sooty mold coats the foliage or in autumn after the leaves have fallen. Young scale can also be found earlier in the summer by examining the undersides of leaves.

It is nearly impossible to control the terrapin scale with insecticide treatments applied during the growing season because the scale covering is impervious to most materials. The best results are obtained when applications are timed to coincide with the active period of the crawlers or when dormant oil sprays are applied before bud break in the spring. Careful pruning can also help control light or scattered infestations of scale insects. See the North Carolina Agricultural Chemicals Manual for specific management information.