Find this article at:
go.ncsu.edu/readext?556899
— Written By Michael Waldvogel 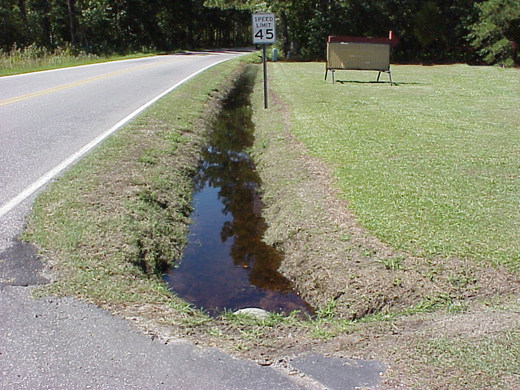 We are obviously not out of Hurricane or mosquito seasons quite yet (that’s a few weeks away). Hurricane Michael promises to bring some rain to part of central and eastern parts of the state. Although we won’t see the flooding that accompanied Florence, we will likely see low lying areas and drainage ditches still clogged with storm debris and silt build-up from previous flooding refill with water become mosquito breeding sites.

So, something to add to your list of weekend chores is to unclog those sites and let the water drain out as much as possible before they can attract more mosquitoes. If you notice that the concrete culvert running under your driveway (as seen in the picture above) has clogged with soil, it can be removed with a marvelous invention called “a shovel”. Try it this weekend. For areas that are too large or too difficult to drain readily, adding a Mosquito Dunk is a way to stop another generation of mosquitoes from developing there. However, remember that even though Mosquito Dunks are convenient and effective, they are not a long-term solution to mosquitoes. It helps to look at where water is impounded and see if there is a way you can address that problem in a more permanent way as well.