Natural control refers to the control of insects provided by natural processes, without human involvement. Although insects can seem very abundant at times, their populations are actually much lower than they would be if it weren’t for this natural control.

If it Weren’t for Natural Control We’d be Swimming in Bugs! 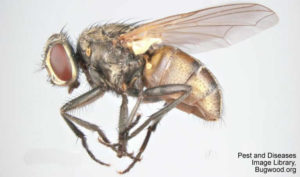 Insects can reproduce very quickly. Let’s take for example the common housefly. These flies can complete a generation (egg to larva to pupa to adult) in less than two weeks under ideal conditions and produce approximately 300 young per female. Theoretically, if you started with two flies (male and female) under ideal conditions, after one generation you would have 300 flies, and each female would produce 300 offspring. After only two generations you would have 90,000 flies that in turn would produce 6.8 million offspring, etc. If this continued for just nine generations (approximately four months), there would be enough flies to cover the entire land surface of the United States three feet deep in flies. This never happens, of course, because populations of flies, like other insects, are kept in check by natural control.

How Does Natural Control Happen?

Natural control refers to the maintenance of insect populations within certain bounds by environmental conditions, or factors. Both non-biological and biological factors contribute to the natural control of insects. These include: