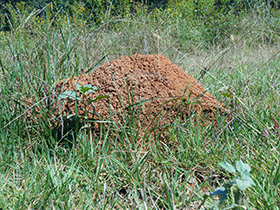 Fire ant mound in a field

Red imported fire ant us found in 75 of North Carolina’s 100 counties. The  mounds vary in size and shape, usually in direct proportion to the size of the colony and on the type of soil (e.g., sandy soils versus clay). For example, a mound that is 2 feet in diameter and 18 inches high may contain about 100,000 workers, several hundred winged adults, and one queen. Mounds are usually located in exposed areas (rarely in shaded or wooded areas) as shown here. You may accidentally step on a nest or grab fire ants during cleanup activities in the yard. 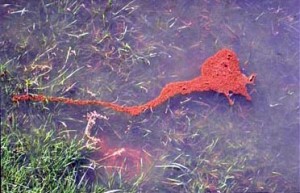 In areas of severe flooding, fire ants will abandon their nests and form  “rafts” which drift in the water until they find ‘high ground’, such as a tree trunk/limb or some other object. In these situations, the ants can pose problems during rescue and recovery efforts and other activities in flooded areas because “high ground” can also be the sides of a boat or the foundation of house..

When disturbed, fire ants will both bite and deliver painful stings. Within 24 hours after a person is stung, a pustule-like sore usually forms at the site of each sting and then usually begins to itch intensively. Scratching the pustule may rupture the skin, potentially leading to secondary infection (particularly if you are working in contaminated waters) as well as scarring. Just as with bee and wasp stings, some people people are highly allergic to fire ant stings and require medical attention after a stinging incident.

Fire ants are particularly fond of greasy-oily foods. While they typically an outdoor problem, disturbances during/after severe weather may bring them indoors in search of food or “high ground” which makes encounters with them more likely.

Here are some suggestions to follow if fire ants are common in your area: