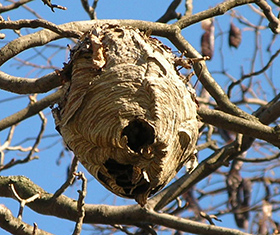 In the late summer and early fall, wasp colonies are close to full size. Flooding and winds during this time may damage the nests, disrupting the colonies and even leaving them homeless. Fallen trees may contain baldfaced hornet (image at right) or European hornet nests. Paper wasp nests may be found on eaves, roof overhangs or under porches and other protected areas of buildings. Hornet nests may also be found in shrubs.. Yellow jackets may be flooded out of their underground nesting sites. Numerous adults will be seen flying around the nest site and may also be attracted to any outdoor foods and exposed trash. Yellow jackets are often attracted to freshly cut and broken wood for the sap or as nesting material. Be cautious when cutting trees and removing branches and other debris. Watch where you step  and look for yellow jacket nests in the ground. Normally, unless a nest is right nearby, the wasps are probably out foraging and are less likely to sting. 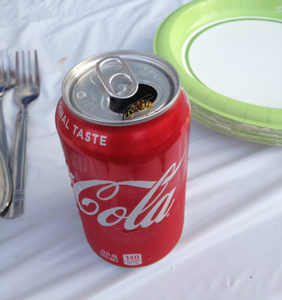 Yellow jacket drinking from the lip of a soda can.

However, they may become entangled in your clothing or you might grab one accidentally when handling limbs. In these situation, they might sting you. As with summer and fall picnics, beverages along with food being cooked and/or consumed outdoors will also attract wasps. Here are some other suggestions for avoiding stings:

Learn more about hornets in turf.