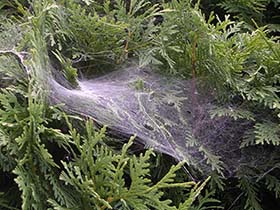 Heavy rains can send ground dwelling spiders to “high ground”, which may bring them onto the foundation and siding of your home or send them indoors if they find an opening (including areas damaged by storms). Spiders may also hide behind window shutters, rain gutters, and other protected areas. Debris that remains on the ground for days-weeks will attract insects and other small arthropods (millipedes, centipedes, etc.) which can become prey for spiders. As you work to clean up outdoors, you may also run into spider webs strung across gaps in vegetation. 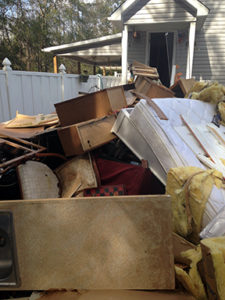 Storm debris piled in yards can become home to spiders.

Although many spiders can bite, most of them are harmless and their venom has little, if any, effect on people other than  individuals who are hypersensitive. However, it’s always a good idea to be cautious and wear work gloves when handling storm debris outdoors or moving items that have been stored undisturbed (indoors or outdoors) for long periods of time.

Black widow spiders are found across North Carolina, but actual encounters with people are relatively rare. Recluse spiders have been found in some areas of the state but they are still considered to be rare by comparison. Mechanical control (vacuuming corners and under/behind furniture, swatting the spider with a rolled-up magazine or newspaper, or stepping on them, etc.) should be more than adequate for the random spider that shows up indoors. Applying pesticides indoors for spiders probably isn’t necessary and probably is not a good idea during cleanup (you may be removing the very chemical you’ve just recently applied) If you prefer to use a pesticide, any common household insecticide will work. Some suggested pesticides can be found in the North Carolina Agricultural Chemicals Manual.  Learn more about spiders in and around homes.